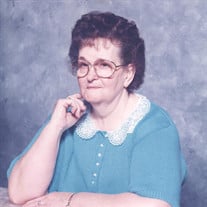 Funeral services for Alta Imogene Willis will be held Tuesday, December 4, 2018 at 2:00 PM at the Parks Brothers Funeral Home Chapel in Okemah. Interment will follow at the Highland Cemetery in Okemah. Alta Imogene Willis was born March 24, 1930 in Wagoner, Oklahoma to Clyde and Gladys (Martin) Moore. She passed way Friday, November 30, 2018 in Newalla, Oklahoma at the age of 88. Mrs. Willis was a loving homemaker and pastor’s wife. She and Albert Glen Willis were married May 3, 1947 in Wagoner, Oklahoma; they later, in 1962, moved to Okemah where she resided until the time of her death. She operated the Montgomery Ward Agency in Okemah in the late 60’s. She also worked at the Blue Bell Sewing Factory, operated a day care and owned and operated Allied Insurance Agency until her health no longer permitted her to continue working. Mrs. Willis enjoyed sewing, reading and especially spending time with her family. She is preceded in death by her parents; her husband, two sisters and five brothers. Survivors include her three sons, Dewayne Willis and wife Lori of Jenks, Oklahoma, Gary Willis of Paris, Texas and Michael Willis and wife Tina of Okmulgee, Oklahoma; four daughters, Patsy McCracken of Crowder, Oklahoma, Sharon Spriggs of Riceville, Tennessee, Rhea McGehee and husband Bill of Okemah and Marilyn Carson and husband Fred of Okemah; one sister, Dorothy Garrett of Ceres, California; 10 grandchildren and 14 great-grandchildren. Serving as active pallbearers will be Kevin McGehee, David McGehee, Landon Willis, Braxton Bates, Garrett Duke and Scott Robb. Services will be under the direction of Parks Brothers Funeral Home, Okemah, Oklahoma and officiated by Bro. Fred Carson and Bro. Frank Brummett.

The family of Alta Imogene Willis created this Life Tributes page to make it easy to share your memories.

Funeral services for Alta Imogene Willis will be held Tuesday,...

Send flowers to the Willis family.