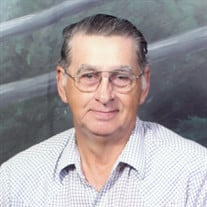 Alvin Lee Keathley was born on December 23, 1936, at home, three miles South of Lamar, Oklahoma to Luster Lovic and Stella Mae (Liles) Keathley. He passed away Saturday, October 12th, 2019 in Shawnee, Oklahoma at the age of 82. Alvin grew up in the Lamar, Dustin, Yeager, Oklahoma areas and graduated, Salutatorian of his class, from Fairview School in Yeager, Oklahoma in 1955. Alvin joined the Air Force and then later married his first wife November 30, 1958. He shipped out to Luckland Airforce Base in South Texas on December 4th, 1958 and served for almost eight years, including active and inactive service, discharging in December 1966. His passion for the Air Force continued as he worked for Tinker Air Force Base in Oklahoma City, Oklahoma, where he retired after twenty three years. Alvin met and later married the love of his life, Julia Underwood on August 8th, 1980 and made their home in Wetumka, Oklahoma. He loved his family and was generous to a fault...always ready to repair or maintain the family vehicles or home. He loved watching his grandchildren play softball and basketball and was always taking them to Dairy Queen, E-Z Mart or Dollar Store to buy treats. One of his bucket list items was to sing at the Grand Ole Opry, where he got his wish while on vacation in June 2013, where he sang for the tour group he was in. What a smile of achievement he had that day. His hobbies included all things cars... buying, selling, fixing them up or just talking about old cars. He also enjoyed carpentry and working with his hands in general. He loved watching TV shows and cartoons with his family and grandkids. His laugh was contagious and would light up the room. He also had an unbelievable memory and could spin some amazing stories and bring out the smallest of details. Alvin is survived by two daughters Anna Marie and Kimberley Jane Keathley from a previous marriage, his wife Julia Keathley of the home, two brothers - James and Charlie Belle Keathley of Benbrook, Texas, Phillip and Florence Keathley of Greenbrier, Tennessee, a sister Melba and husband Marvel Hawkins of Oklahoma City, Oklahoma. Six step sons - James and Shelley Underwood of Mt. Washington, Kentucky, Mike and LaNita Underwood of Broken Arrow, Oklahoma, Joe Underwood of Norman, Oklahoma, Corley and Chrissy Underwood of McAlester, Oklahoma, Danny and Julie Underwood of Van Buren, Arkansas and Mark Underwood of Wetumka, Oklahoma and twenty plus grandchildren, numerous great grandkids, family and friends. He was preceded in death by his parents Luster and Stella Keathley, several brothers, Mack Keathley, Neil Keathley, Paul Keathley, Len Keathley, and Lee Lewis Keathley. Two sisters, Lucia (Lucy) Gray and Marguerite Willoughby. Serving as active pallbearers will be Phillip Keathley, Mike Underwood, Danny Underwood, Steve Davis, Rick Davis and Joe Underwood. Honorary bearers include Dale Proctor, Gary Gray, James Underwood, Corley Underwood, Mark Underwood and James Keathley. Funeral services will be held at the First Assembly of God Church in Wetumka, Oklahoma, Wednesday, October 16, 2019 at 10:00 AM under the direction of Parks Brothers Funeral Home, Wetumka, Oklahoma and officiated by Pastor Curt Bellinger. Interment will follow at the Wetumka City Cemetery. Online condolences may be made at www.ParksBrothersFuneralHome.com.

The family of Alvin Lee Keathley created this Life Tributes page to make it easy to share your memories.

Send flowers to the Keathley family.