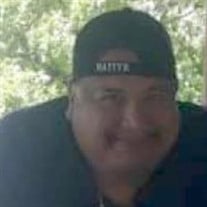 Funeral services for Amos Green will be held Tuesday, September 28, 2021 at 3:00 PM graveside at the Karlarney Cemetery near Weleetka, Oklahoma. Amos Green was born August 4, 1970 in Claremore, Oklahoma to Daniel Green and Janice Lee (Harjo) Green. He passed away Friday, September 24, 2021 in Tulsa, Oklahoma at the age of 51. Amos was a lifelong resident of Weleetka, Oklahoma and was a 1989 graduate of Weleetka High School. He worked for the Corpro. Company since 1993 and enjoyed grilling, fishing and watching OU Football. He is preceded in death by his father, Daniel Green and one brother, Daniel (Big Man) Green. Survivors include his mother, Janice Lee (Harjo) Green of Weleetka; his girlfriend, Laura Frenchman of the home; two brothers, Louis Green of Tulsa and Kirby Green of Weleetka and one nephew, Austin Green. Serving as pallbearers will be Ben Powell, Yahola Wind, Cody Muniz, Elih Yargee, Spencer Wind and Nate Wind. Honorary bearers include Chris Yargee, Tommy Harjo, Louis Green and Kirby Green. Services will be under the direction of Parks Brothers Funeral Home and officiated by Harry Anderson.

The family of Amos Green created this Life Tributes page to make it easy to share your memories.

Funeral services for Amos Green will be held Tuesday, September...

Send flowers to the Green family.