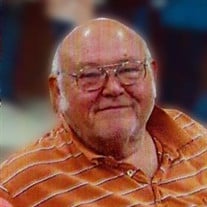 Funeral services for Andrew Jackson Mooring will be held Wednesday, August 11, 2021 at 2:00 PM at the Parks Brothers Funeral Home Chapel in Okemah with Bro. Terry Speir officiating. Andrew Jackson Mooring Jr. was born February 12, 1947 in Hanna, Oklahoma to Andrew Jackson Mooring Sr. and Opal Lee (Burgans) Mooring. He passed away Saturday, August 7, 2021 at his home north of Paden, Oklahoma at the age of 74. Jack attended school at West Liberty. In 1955, the family moved to Stanfill, Arizona where he attended and graduated from Casa Grande Union High School. He later attended Seminole State College and also received a certificate in Leadership and Child Development from OU. Jack worked for McDonnell Douglas for three years, Boley Boys Institution for twelve years and the Boley Department of Corrections for 27 years. He also worked as a cook, a store manager, motel clerk, restaurant owner, cabinet maker and had a lawn care service. On May 23, 1969 he married Donna Beth Kennedy; she preceded him in death in 2004. On November 3, 2006 he married Sherry Ann Mayfield. Jack was also preceded in death by his parents; brothers, Douglas and Kenneth Dale and sisters, Bobby, Mary Lou and Frankie. Survivors include his wife, Sherry of the home; sisters, Coriena Davis of Hanna and Shirley Mooring of Phoenix, Arizona; sister in law, Phyllis MacArthur of Keota, Oklahoma; mother in law, Hazel Mayfield and many nieces, nephews, step children, step-grandchildren and cousins. Services will be under the direction of Parks Brothers Funeral Home of Okemah, Oklahoma. Online condolences may be made at www.ParksBrothersFuneralHome.com.

The family of Andrew "Jack" Mooring Jr. created this Life Tributes page to make it easy to share your memories.

Funeral services for Andrew Jackson Mooring will be held Wednesday,...

Send flowers to the Mooring family.