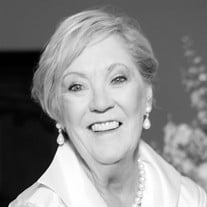 Barbara Louise Earnest Fox, 77, died Thursday, April 26, 2018 at her Okemah home with her family by her side. She was the beloved wife of the late James C. “Muggs” Fox—her high school sweetheart. They shared 47 wonderful years of marriage together. Barbara was born on August 5, 1940 in Okemah, Oklahoma. She attended Okemah public schools and graduated from Okemah High in 1957 and later served as President of the Alumni Association. A faithful servant of the public, Barbara was elected five consecutive terms as Okfuskee County Clerk, serving for a total of twenty years, and was chosen by her peers as the President of the Oklahoma Association of County Clerks. Also, Barbara was once selected to appear in the “Who’s Who in Executives and Professionals." At an early age, Barbara professed her faith in Jesus Christ and was a long-time member of the Okemah First Baptist Church. She enjoyed reading, traveling with her friends, watching movies, and playing cards. Above all, Nana, as her grandchildren called her, enjoyed spending time with her family—and, to be sure, they certainly adored her in return. It can never be said that Barbara lacked in candor. She was affectionately given the nickname “The General,” a designation certainly not without merit. If “The General” was issuing orders, they were to be faithfully executed. But it was all in jest. As anyone who knew her would attest, Barbara had a contagious sense of humor that only paled when compared to her thoughtfulness and dedication to those she loved. Barbara is survived by her children, Jason Fox, Rene Meara, LaNita Brewer and their spouses Dana, John and Dale, grandchildren Loren, Madison, Will, Jon Ryan, Angela, Dale, Emma, Jennifer, Johnny, Jessie, and Jill, along with nine great grandchildren and two great-great grandchildren. She was preceded in death by her parents, Louie and Verble Earnest and her sister Juanita. Serving as pallbearers will be Jon Ryan Blankenship, Will Blankenship, Johnny Meara, Greg Dowty, McLean Kistner, Shane Walker, Dale Brewer and Taylor Green. Funeral services will be held at Parks Brothers Funeral Home on Monday, April 30th, at 2:00 P.M, to be followed by graveside services at Highland Cemetery. Memorial donations may be made out to the Okemah Alumni Association. Services will be under the direction of Parks Brothers Funeral Home, Okemah, Oklahoma and officiated by Chaplain Sam Garner.

The family of Barbara Louise Fox created this Life Tributes page to make it easy to share your memories.

Send flowers to the Fox family.