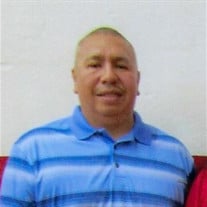 Funeral services for Benjamin “Bonjo” Hill Jr. will be held Friday, March 11, 2022 at 2:00 PM at the Faith Baptist Church of Dustin, Oklahoma. Interment will follow at the Hill-Jackson Cemetery in Vernon. Wake services will be Thursday evening at the Faith Baptist Church. Benjamin Hill Jr., also known as “Bonjo”, was born March 24, 1974 in Tahlequah, Oklahoma to Benjamin Hill Sr. and Mandy (Starr) Hill. He passed away Friday, March 4, 2022 in Okemah at the age of 47. Benjamin grew up and in Dustin, Oklahoma and was a 1992 graduate of Dustin High School. He was currently residing in Okemah. He enjoyed playing softball and basketball and loved watching ballgames. Benjamin liked going to the ceremonial grounds, playing stickball and was a good cook. Most of all he loved spending time with his family who will miss him terribly. He is preceded in death by his parents; one brother, Jimmy Starr, one sister, Christine Fixico and numerous cousins, aunts and uncles. Survivors include his special friend, Charlene Beaver of Okemah; three sons, Nathan Prentiss of Henryetta, Isaac Prentiss of Henryetta and Jaden Smith of Stillwell; two daughters, Monique Prentiss of Henryetta and Lauryn Hill of Eufaula; two brothers, Thomas Lewis of Dustin and Sampson Lewis of Henryetta; two sisters, Frances Lewis of Eufaula and Pauline Lewis of Shawnee; one grandson, Grayson Prentiss; aunts and uncles, Lillie Hill, Maxine Hill, Amy Hill, Alene Starr, Amy Reagan, Billy Hill and Jackie Yargee. Serving as pallbearers will be Alexander Yargee, J. D. Harley, Billy Ray Harley, Micah Hill, Chase Hill and Michael “Boy” Hill. Cousins will be serving as honorary pallbearers. Services will be under the direction of Parks Brothers Funeral Home and officiated by Major McHenry. Online condolences may be made at www.ParksBrothersFuneralHome.com.

Funeral services for Benjamin &#8220;Bonjo&#8221; Hill Jr. will be held Friday, March 11, 2022 at 2:00 PM at the Faith Baptist Church of Dustin, Oklahoma. Interment will follow at the Hill-Jackson Cemetery in Vernon. Wake services will be... View Obituary & Service Information

The family of Benjamin "Bonjo" Hill created this Life Tributes page to make it easy to share your memories.

Send flowers to the Hill family.