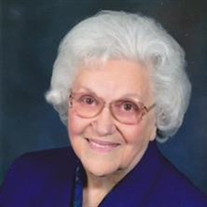 Funeral for Mrs. Bennie Jean (Zunigha) Meaders will be held Saturday, May 19, 2018 at 10:00 AM at the First Baptist Church in Okemah. Interment will follow at the Highland Cemetery in Okemah. Bennie Jean (Zunigha) Meaders was born June 11, 1926 in Okemah, Oklahoma to Benjamin and Olive Benson. She passed away Tuesday, May 15, 2018 at her home in Okemah at the age of 91. Mrs. Meaders was a longtime educator. She received her bachelor’s degree from Oklahoma Baptist University. She later received a Master Teachers Degree from New Mexico State University and a Master’s Degree in Education from the University of Oklahoma. She married Freeman Wilson Zunigha December 24, 1947; he later preceded her in death. On November 7, 2007 she and Roland K. Meaders were married in Okemah, Oklahoma; he preceded her in death March 27, 2011. Mrs. Meaders spent 20 years as an educator on or near the Navajo Reservation and worked with the Bureau of Indian Affairs. Overall she had over 25 years of working in Oklahoma, Arizona and New Mexico in State and Federal Government Schools before retiring in 1982. Mrs. Meaders was also a longtime member of the First Baptist Church of Okemah. Her faith was an integral part of who she was. Also preceding her in death were her parents; 5 brothers, 4 sisters, one son, Michael D. Zunigha and one great-granddaughter, Ashley Platt. Survivors include two sons, Merle Eugene Zunigha and wife Carolyn of Glendale, Arizona and Roger Lynn Zunigha and wife Diane of Midland, Texas; two daughters, Olivia Ann Weeks of Trinity, Texas and Gayla Hatfield and husband Rick of Okemah, Oklahoma and was blessed with seven grandchildren and twelve great-grandchildren. Serving as pallbearers will be Tommy Klutts, Bob Tinsley, Curtis Zunigha, Kyle Hatfield, Alex Jordan and Bryan Benson. Honorary bearers include Phil Hatcher and Nick Lambeth. Services will be under the direction of Parks Brothers Funeral Home, Okemah, Oklahoma and officiated by Bro. Paul Jones. Bennie Jean, better known as Nanny to the family, had a sincere response when anyone asked her how she was. Her response was always “I’m blessed.” While that was true, the people who knew her were well aware that we were the ones who were blessed for having her in our lives.

The family of Bennie Jean Zunigha Meaders created this Life Tributes page to make it easy to share your memories.

Send flowers to the Meaders family.