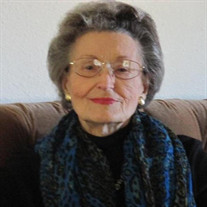 Betty Jo Danenhour, formerly Lack, died Thursday June 11, 2020 in Tulsa OK at the age of 95. She was born Feb. 10, 1925 in Big Flat, Ark. To John Estel and Leona Mae (Henry) Lack. In 1936 she moved with the family to south of Okemah, OK, in a vicinity called Sand Springs in Okfuskee County. She attended Sand Springs grade school and Okemah High School, graduating in 1943. After graduation she worked for several businesses in Okemah before being employed by the Oklahoma Dept. of Human Services in 1959. After 33 years of service she retired from service there. She married Russell Ray Danenhour in 1944. He preceded her in death in 2002. They had two daughters Olivia Gaile and Rusty. At the time of Russell’s death they had been married 58 years. The Danenhours spent most of their lives in the Okemah area, moving briefly to Hemet, Calif. She was active in the Calvary Baptist Church, where she was known for her peach cobblers and pecan pies that she took to funeral and church dinners. Betty loved cooking for others, fishing, and family gatherings. She spent her last months at the Baptist Village of Oklahoma in Owasso, where she never failed to “glam up” for the other seniors. She was preceded in death by four brothers, John Ralph, Kenneth, Jennings and Henry Lack, all of Tulsa. And two sisters, Helen Smith of Lompoc, Calif.; and Elizabeth Rhea McCurdy, of Okemah. She is survived by her daughters, Olivia Gaile Grindheim and her husband, Myron; and Rusty Lang, both of Tulsa. Two grandchildren, Emily Jimenez, Harker Heights, Texas, and her husband Randy; and Daryl Bean and his wife Kayla, of Lone Grove OK. Also four great-grandchildren and many nieces, nephews and cousins. Funeral services will be Wednesday, June 17, 2020 at 1:00 PM at the Parks Brothers Funeral Home Chapel in Okemah. Interment will follow at the Highland Cemetery in Okemah Services will be under the direction of Parks Brothers Funeral Home and officiated by Rev. Kellos Walker. Pallbearers will be nephews. Honorary pall bearers will be John Luckett, Raymond Overall, Joe Cheatwood, Eugene Cheatwood and Mack Thompson. The family of Betty have requested that anyone who wishes to attend, please practice social distancing at the service. They also would like those who attend to please wear a mask. Online condolences may be made at www.ParksBrothersFuneralHome.com.

The family of Betty Jo Danenhour created this Life Tributes page to make it easy to share your memories.

Send flowers to the Danenhour family.