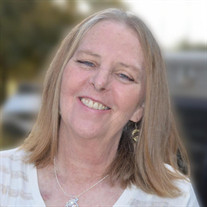 Funeral services for Betty Ann Welcher will be held Monday, November 1, 2021 at 10:00 AM at the Parks Brothers Funeral Home Chapel in Okemah. Interment will follow at the Welty Cemetery. Betty Ann Welcher was born March 2, 1963 in Okemah, Oklahoma to Alva and Iva (Thomas) Walker. She passed away Wednesday, October 27, 2021 at her home in Shawnee, Oklahoma at the age of 58. Betty was a loving homemaker and housewife whose life revolved around her grandchildren. She loved taking care of the kids and watching them play ball. Betty was a 1981 graduate of Mason High School and on April 5, 1985, in Bristow, Oklahoma, she married Terry Welcher. She is preceded in death by her parents and one son, Jeremy. Survivors include her husband, Terry Welcher of the home; her mother, Iva Walker of Haydonville; two sons, Justin Welcher and wife Tara of Shawnee and Glenn Welcher of Midwest City; her daughter, Emily Welcher of Shawnee; three brothers, Wayne Walker and wife Lynn of Haydonville, Clyde Walker and wife Susan of Okemah and Howard Walker and wife Gina of Muskogee; three sisters, Jane Sessions of Harrah, Dorothy Walker of Okemah and Mary Davis of Holdenville and five grandchildren, Kelbey Welcher, Maycee Welcher and Kaydence Welcher all of Shawnee, Adrianah Lee of Tahlequah and Garett Welcher of Muldrow. Serving as active pallbearers will be Clyde Walker, Jimmy Sessions, David Walker, Robert Davis, Wayne Walker and Howard Walker. Services will be under the direction of Parks Brothers Funeral Home, Okemah, Oklahoma and officiated by Rev. Gene Jackson.. Online condolences may be made at www.ParksBrothersFuneralHome.com.

Funeral services for Betty Ann Welcher will be held Monday, November 1, 2021 at 10:00 AM at the Parks Brothers Funeral Home Chapel in Okemah. Interment will follow at the Welty Cemetery. Betty Ann Welcher was born March 2, 1963 in Okemah,... View Obituary & Service Information

The family of Betty Ann Welcher created this Life Tributes page to make it easy to share your memories.