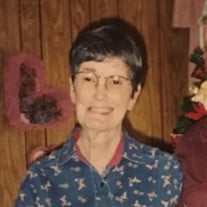 Funeral services for Beverly Ann Mulliniks will be held Saturday, August 7, 2021 at 1:00 PM at the Skyview Baptist Church of Okemah. Interment will follow at the Fairview Cemetery in Dustin, Oklahoma. Beverly Ann Mulliniks was born August 9, 1933 in Meeker, Oklahoma to Robert and Lola Mae (Yarbrough) Green. She passed away Tuesday, August 3, 2021 at her home in Okemah at the age of 87. Mrs. Mulliniks was a longtime resident of Okemah and a 1951 graduate of Okemah High School. On October 26, 1950, in Ft. Polk, Louisiana, she married Melvin D. Mulliniks; he later preceded her in death on February 8, 2004. Mrs. Mulliniks was a loving homemaker who had also worked as a florist. She was a gifted artist who enjoyed painting and drawing and also enjoyed playing instruments. Mrs. Mulliniks loved Jesus and was a member of the Skyview Baptist Church of Okemah. The true joy of her life was taking care of her husband. She is also preceded in death by her parents and two sisters, Betty Shipman and Peggy Fifer. She is survived by her son, Joe Mulliniks and wife Lori of Wilson, Oklahoma; her daughter, Deborah Boyd of Okemah; five grandchildren, Katie Weddleton, Beth Boyd, Karli Wise and husband Jake, Travis Mulliniks and Dusty Mulliniks and wife Sarah and 4 great-grandchildren, Ella Wise, Judah Wise, Liam Mulliniks and Levi Mulliniks. Serving as active pallbearers will be Jake Wise, Dusty Mulliniks, Travis Mulliniks, Roberto Luna, Tom Shipman and Evan Busby. Honorary bearers include Larry Miller, Jim Liles and Travis Barlow. Services will be under the direction of Parks Brothers Funeral Home and officiated by Bro. David Hamilton and Bro. Terry Pittman. Online condolences may be made at www.ParksBrothersFuneralHome.com.

The family of Beverly Ann Mulliniks created this Life Tributes page to make it easy to share your memories.

Funeral services for Beverly Ann Mulliniks will be held Saturday,...

Send flowers to the Mulliniks family.