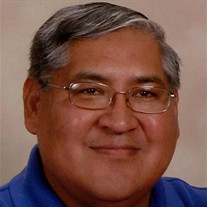 Graveside services for Rev. Billy Wood Coon will be Friday, February 19, 2021 at 1:00 PM at the West Anderson Cemetery north of Okemah. Rev. Billy Wood Coon, joined God's most Elite Warriors for Christ, Friday, February 12, 2021, at the age of 61. He was born in Oklahoma City, OK, on June 30, 1959, and passed away at Mercy Hospital in OKC, OK. He made Okemah his lifelong home in 1975, where he met his wife, Bonita (Berryhill) Coon, in 1977 and later married, November 21, 1992. They had three children together; Vincent Coon and life partner, Priscilla Fixico of Okemah, OK; Katie Coon and fiancé, Tori Jones of Okemah, OK, and Bobbie Coon, the baby that hasn't left the nest, yet. Survivors also include his five granddaughters; Katherine Morgan, Callie Coon, Jaci Galindo, Timilyn Morgan, and Lorelai Coon; his sister, Rosie, and husband Captain Smith of Shawnee, OK; and brother Timmy and wife Brenda Coon of Welty, OK and a host of many nieces, nephews, other relatives, and friends. He was greeted at the gates of heaven by his parents, Walter and Lillie (Fixico) Coon, three brothers; Walter Coon (Jr), Terry Coon, Johnny Coon, and two sisters; Bessie Wise and Lucy (Babe) Coon. Growing up, he attended Wolf Elementary, Eufaula Indian Boarding School, American Legion Home for Boys, Bowlegs High School, and Okemah High School, where he graduated in 1978. During his adult years, he attended OSU Technical College, East Central University, and Seminole Jr. College, where he became a graduate in 1999. He became a Soldier for Christ at Greenleaf Missionary Baptist Church in 1989. He served as a Sunday School Teacher, Discipleship Teacher, Youth Leader, ordained Deacon, and later called to the ministry becoming an ordained Pastor in 2007. He then continued his ministry in 2014 at Prairie Springs Indian Baptist Church until his passing. He made his living; by working weldings jobs in the Castle and Wetumka, OK area, at Deans Manufacturing, as a Chemical Dependency Assistant at Second Chance Adolescent Center, as a Resident Advisor at Sac & Fox Juvenile Detention Center, as a Security Officer at the Okemah Hospital and later Seminole Nation Casino, and as a Family Service Worker at Muscogee (Creek) Nation Head Start and Seminole Nation Head Start. He retired as a Family Service Worker at Seminole Nation Head Start in Konawa, OK, in 2020. He advocated for the native youth by being involved in the community and through local organizations, fatherhood initiative programs, and all native children's education. He was a devout Man of God and Soldier for Christ first and foremost. He enjoyed fellowship with his Sisters and Brothers' in Christ and spreading the gospel by visiting many churches with Rev. Timmy Coon and Rev. Chad Smith. During his time at home, he enjoyed sharing his wisdom and love for sports, fishing, gardening, carpentry, and movies with his children and granddaughters. His greatest accomplishment was becoming a father and letting his children know how much he loved to serve God. So that when it was his time to go, he could leave this life knowing his children knew God and that he stood for Him. He loved and prayed for everyone with everything he had in him. To know Rev. Billy Coon, was to know he served and loved God with all his heart. Services will be under the direction of Parks Brothers Funeral Home and officiated by Chad Smith and Timothy Coon. Serving as active pallbearers will be Joe Jon Smith, Colin Coon, Terral Coon, Derek Garcia, Kobe Smith, Greg Smith, Jacob Garcia, Wade Davis, Conner Fixico and Svk’co Smith. Honorary bearers include Captain Smith, Victor Berryhill, Darrel Coon, Manuel Fixico, Jason Smith, Randy Smith and Chester Smith. Online condolences may be made at www.ParksBrothersFuneralHome.com.

The family of Rev. Billy Wood Coon created this Life Tributes page to make it easy to share your memories.

Send flowers to the Coon family.