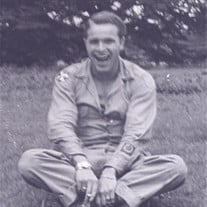 Funeral services for Billy Ray Fulsom will be held Monday, February 5, 2018 at 10:00 AM at the Parks Brothers Funeral Home Chapel in Okemah. Interment will follow at the Highland Cemetery in Okemah. Billy Ray Fulsom was born June 21, 1924 in Okemah, Oklahoma to Cash Fulsom and Mabel Henryetta (Beets) Fulsom. He passed away Wednesday, January 31, 2018 in Okemah, Oklahoma at the age of 93. Ray was a longtime resident of the Okemah area and a graduate of Okemah High School. When he met the love of his life, Mable Wasson, it happened at a dance ball room in Oklahoma City where Bob Wills and the Texas Playboys were playing. Later one other night they were pulled aside by Bob Wills and he told them they were the best couple on the floor. He and Mable Helen Wasson were married March 28, 1947 in Oklahoma City; she later preceded him in death December 6, 1998. Ray proudly served his country with the United States Army during WWII. He was among the first troops to step foot in Hiroshima after the bombing. He was a 2nd cousin to the winning World Series pitchers of the St. Louis Cardinals, Paul and Dizzy Dean. They would visit him and first cousin Cash’s farm to quail hunt during the off season. Ray would get to catch pitches from both while they practiced. Mr. Fulsom retired from Tinker Airforce Base and worked many years as a farmer and rancher and was a member of the Okemah Church of Christ. Also preceding him in death were his parents; one son, Dr. Stanley Ray Fulsom; three brothers and one sister. Survivors include his son, Chris Fulsom of Okemah; one brother, Dale Fulsom of Oklahoma City and two dear sisters in law, Rachel Tidmore and husband Elroy of Sharon, Oklahoma and Mart LeMay Fulsom of Okemah. Serving as active pallbearers will be Dug Sharp, Johnathon Sharp, Ronnie Lucas, Dennis Lucas, Ken Adams and Terry Edminsten. Services will be under the direction of Parks Brothers Funeral Home, Okemah, Oklahoma and officiated by Senator Roger Thompson.

Funeral services for Billy Ray Fulsom will be held Monday, February 5, 2018 at 10:00 AM at the Parks Brothers Funeral Home Chapel in Okemah. Interment will follow at the Highland Cemetery in Okemah. Billy Ray Fulsom was born June 21, 1924... View Obituary & Service Information

The family of Billy Ray Fulsom created this Life Tributes page to make it easy to share your memories.

Send flowers to the Fulsom family.