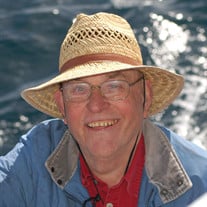 Long time Alaskan Billy “Bill” “BNO” Neal Osborn passed away peacefully surrounded by his family November 21, 2018 in Wichita, Kansas at the age of 89. Billy was born March 3, 1929 in Wetumka, Oklahoma where he was raised on the family farm. He married his wife, Betty Jo Womack in 1950 and they moved to California in 1951 with son Keith. Bill was drafted into the Army during the Korean War and served in Yokohama, Japan for two years. His duties as an Army Stevedore included the security of sensitive cargo for troops coming into port. Bill also served in the Unit Honor Guard. When Bill finished his Army service he returned to California and began his 38-year career with Shell Oil Company. He started as a rough neck in the oil fields of Ventura County, California and in 1968 was promoted within Shell, which included a family move to Alaska in 1969. He was instrumental in setting up Shell Oil’s Platform C in Cook Inlet and worked as Foreman there for many years. At the time of his retirement in 1991 he was Production Foreman for Shell Alaska. In Kenai, Bill volunteered and was on the board of directors for many organizations over the years, including The Salvation Army, Kenai Harbor Commission, Planning and Zoning Committee and the Council on Aging for the City of Kenai, Kenai Senior Connection, Inc., Cook Inlet Regional Citizens Advisory Council and Cook Inlet Spill Prevention and Response, Inc. Bill and his wife Betty loved to travel and visited many countries around the world. He thoroughly enjoyed fishing with family and friends anytime and anywhere, but especially on the Kenai River. During the long Alaskan summers, he took great pride in having the nicest lawn and garden in the neighborhood. He was always willing to share his knowledge about gardening and helped neighbors when they needed it. During the long winter months Bill enjoyed bowling in the senior league with Betty. Bill is survived by his wife Betty of 68 years; along with his son and daughter-in-law Keith and Cindy Osborn, and his daughter and son-in-law Vicke and Ray Kukowski; 7 grandchildren: Benjamin (Wendy), Andrew, William, Shelbe (Chauntae), and Tyler; 3 great-grandsons: Jaden, Colin and Kyle; brother and sister-in-law Roy and Betty Osborn, sister and brother-in-law Shirley and Herva Zackary, sister Doris Phillips, and many nephews and nieces. Bill was preceded in death by his son Jeff, parents Jeddie and Alta Osborn, brothers JL and Grant, and sisters Reba, Geneva, and Vanita. Pallbearers will be Benjamin, Andrew, William, and Jaden Osborn, Shelbe and Tyler Kukowski. Services to be held at the Assembly of God, Wetumka, Oklahoma, December 1, 2018. Visitation beginning at 10:00 am with the service at 11:00 am. Interment will follow at the Wetumka City Cemetery with a reception following at the church. Officiating the service will be Bill’s nephew, Gregg Zackary. The family requests in lieu of flowers that donations be made “in memory of Bill Osborn” for construction of “Bill’s Garden” Greenhouse which he had advocated for while serving on the Senior Connection Board. Please send donations to Kenai Senior Connection, Inc., c/o Kenai Senior Center, 361 Senior Drive, Kenai, Alaska 99611. Services will be under the direction of Parks Brothers Funeral Home, Okemah, Oklahoma.

The family of Billy Neal Osborn created this Life Tributes page to make it easy to share your memories.

Send flowers to the Osborn family.