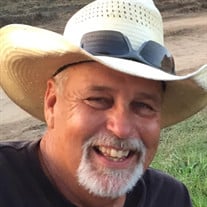 Funeral services for C.A. Saylors will be held Saturday, February 20, 2021 at 11:00 AM at the Freewill Baptist Church of Weleetka. Interment will follow at the Weleetka Cemetery. Chester Arthur “C.A.” Saylors, Jr. was born September 10, 1956 in Alexandria, Louisiana to Chester Arthur “Chuck” Saylors and Rozelle (Ladd) Saylors. He passed away Sunday, February 14, 2021 at his home in Weleetka, Oklahoma at the age of 64. C.A. grew up in Choctaw, Oklahoma and later graduated from Choctaw High School. After high school he enlisted in the United States Army and on January 27, 1978, in Weleetka, Oklahoma, he married Lisa Burden. They settled and made their home in Weleetka. C.A. retired from Burlington Northern Santa Fe Railroad as a welder for 21 years. He enjoyed fishing, roping, hunting and cooking for everybody at deer camp. His real love was playing music with his friends and especially spending time with his grandchildren and family. Those who knew C.A. loved him and he will be dearly missed. He is preceded in death by his parents. Survivors include his wife, Lisa Saylors of the home; his son, Clinton Alan Saylors and wife Rachel of Muskogee; his daughter, Katelyn Bigbie and husband Hunter of Prague; three sisters, Cheryl Coppin and husband Howard of Oklahoma City, Lanette Copeland of Weleetka and Terri Burden and husband Steve of Weleetka and five grandchildren, Addie Saylors, Caleb Alan Saylors, Rylee Bigbie, Silas Bigbie and Eli Bigbie. Serving as active pallbearers will be Clinton Alan Saylors, Hunter Bigbie, Caleb Alan Saylors, Jesse Burden, Tyler Burden and Ace Burden. Services will be under the direction of Parks Brothers Funeral Home. Online condolences may be made at www.ParksBrothersFuneralHome.com.

Funeral services for C.A. Saylors will be held Saturday, February 20, 2021 at 11:00 AM at the Freewill Baptist Church of Weleetka. Interment will follow at the Weleetka Cemetery. Chester Arthur &#8220;C.A.&#8221; Saylors, Jr. was born September... View Obituary & Service Information

The family of C.A. Saylors created this Life Tributes page to make it easy to share your memories.

Funeral services for C.A. Saylors will be held Saturday, February...

Send flowers to the Saylors family.