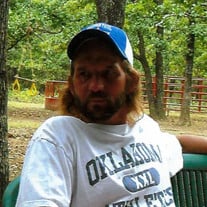 Funeral services for Calvin Ray Parker Sr. will be held Saturday, June 22, 2019 at 2:00 PM at the Parks Brothers Funeral Home Chapel in Okemah. Interment will follow at the Castle Cemetery. Calvin Ray Parker was born January 5, 1973 in Red Bay, Alabama to Alvin B. Parker and Mary Alice (Robison) Parker. He passed away Monday, June 17, 2019 near his home in Castle, Oklahoma at the age of 46. Calvin grew up in Alabama and was a current resident of Castle, Oklahoma. He and Lisa Marie Allen were married January 29, 1993 in Okemah. Calvin worked as a handy man, tree trimmer, mowing lawns and many other jobs. He enjoyed fishing, mechanical work and spending time with his family. He is preceded in death by his wife, Lisa; his father, Alvin; one sister, Terry and one daughter, Abigaile Parker. Survivors include his mother, Mary Alice Parker of Hamilton, Alabama; his daughter, Shannon Franklin and husband Willie of Okemah; his son, Calvin Parker, Jr. of Colorado; one brother, Alvin Parker and wife Wendy of Hamilton, Alabama; three sisters, Terita Rice and husband Dwayne of Hamilton, Alabama, Daphne Brown and husband Autie of Moulton, Alabama; Tina Fisher and husband Joe of Okmulgee, Oklahoma and Dottie Parker of Hamilton, Alabama and four grandchildren. Services will be under the direction of Parks Brothers Funeral Home, Okemah, Oklahoma and officiated by Rev. Jerry Grayson.

The family of Calvin Ray Parker Sr. created this Life Tributes page to make it easy to share your memories.

Send flowers to the Parker family.