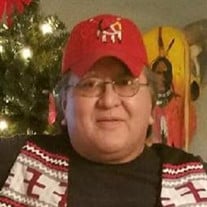 Funeral services for Carl Ray Noon will be held Thursday, January 18, 2018 at 2:00 PM at the Montesoma Indian Baptist Church in Okemah. Interment will follow at the Montesoma Church Cemetery. Wake services will be Wednesday, 7:00 PM at the Montesoma Indian Baptist Church. Carl Ray Noon was born January 29, 1960 in Claremore, Oklahoma. He died Sunday, January 14, 2018 in Okemah, Oklahoma at the age of 57. Carl lived most of his life in Okemah and was a 1978 graduate of Okemah High School where he played on the Class A 1976 State Champion Football Team. In 1999, Carl received a bachelor’s degree in business administration from the University of Oklahoma. Carl loved music, playing the guitar, hunting, fishing and most of all singing and sharing Muscogee Creek Hymns. He was also active in human rights such as Water Rights for Standing Rock and planned on attending Bears Ear movement. Carl was the son of the late William “Pudgy” Noon and Pat Bear Noon. He leaves behind sisters, Levonne “Lee” Stokes; Connie Short of Texas; brother, Sonny Bear and wife Sherry Little Bear of Bristow; sisters, BT Tyner and Melinda Byrd; and children, DJ Noon and Kim Noon. He also is survived by numerous nieces, nephews, cousins and a host of friends and family. Carl had been an active member of the Montesoma Indian Baptist Church of Okemah. He was baptized at this church at a young age. When reading through peoples responses, words like loving human being, he did so much for us, truly one of a kind, awesome man, huge heart, bright soul, great warrior, a friend that mad himself family to many, quick minded, good man, a true masterpiece and your heart so precious and good. However, the many words written and spoken would never do justice to Carl and his life. His life was obstacle after obstacle and he had to fight for it every day. Whether it was health, financial or emotional struggles. His strong faith helped him many times and this is what made him strong. Carl’s passing leaves a great void for family and friends. His is taking his beautiful voice, his beautiful music, beautiful mind and spirit to a higher calling. It is difficult to let go of such a gracious person and more difficult to know that he will not be there when we call again. Carl carried a lot of weight spiritually for people. Their burden was his burden, their aches and pains were his aches and pains. It’s our turn to carry the weight. Carl would use his voice to comfort others during their time of need. He can’t sing for himself so we have to sing for him. We have to help him make that journey the next few days where he no longer has aches and pains and no burdens to bear. We are helping him make that final journey where he can sing with angels now. Serving as active pallbearers will be Brandon Noon, Craig Short, Marcus Canard, Matt Henneha, Justin Little, Darryl Canard, Gaylon Bear, Ashton Noon and Nate Bear. Honorary bearers will be Teddy Bear, Patrick Bear, Daniel Bear, Frank Bear and the Montesoma Brotherhood. Services will be under the direction of Parks Brothers Funeral Home, Okemah, Oklahoma and officiated by Bro. Jody Berryhill and Rev. Ed Bear. Online condolences may be made at www.ParksBrothersFuneralHome.com.

The family of Carl Ray Noon created this Life Tributes page to make it easy to share your memories.

Send flowers to the Noon family.