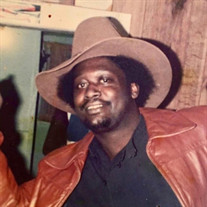 Funeral services for Carl Luwayne Zackery will be held Saturday, November 9, 2019 at 2:00 PM at the Clearview Community Center in Clearview, Oklahoma. Interment will follow at the Clearview Cemetery. Carl Luwayne Zackery was born March 22, 1957 in Weleetka, Oklahoma to Wilbert Zackery and Ida Mae (Slaughter) Zackery. He passed away Thursday, October 31, 2019 in Tulsa, Oklahoma at the age of 62. Carl was a resident of the Weleetka area most all of his life and was a 1975 graduate of Weleetka High School. He and Dortha S. McComb were married May 21, 1992 in Castle, Oklahoma. Carl worked as a physical therapist tech for 19 years before his retirement in 2003. Carl liked living life to the fullest and enjoyed watching his nieces and nephews participate in extracurricular activities, especially, football and basketball. He enjoyed fishing, gardening and had a big heart for animals. Carl really enjoyed being the life of the party (dancing with his old school moves) and telling his favorite jokes. Survivors include his parents, Wilbert and Ida Mae Zackery of Weleetka; his wife, Dortha Zackery of Weleetka; two brothers, Wilbert Zackery Jr. of Tulsa and Steve Zackery and wife Jennifer of Okemah; four sisters, Irene Zackery, (Speedy) of Weleetka, Delores Bailey and husband Alvin of Broken Arrow, Oklahoma, Alisha Chavez and husband Marcelo of Tulsa and Tamara Mead, (JJ Mead) of Broken Arrow; two step daughters, Kelli Rector and husband Chris of Weleetka and Angela Herring and husband James of Okemah and a host of nieces, nephews and grandchildren. Serving as active pallbearers will be Travis Zackery, Alvin Bailey Jr., Jerry Williamson, Willie French, Mike Zackery, Paul Zackery, Maurice Wortham and Cody Farrow. Honorary bearers will be Jacob Rector and Mikal Zackery. Services will be under the direction of Parks Brothers Funeral Home, Okemah, Oklahoma and officiated by Wilfred Slaughter. Carl also leaves to cherish his memories two very special relatives: Aunt Sally Ann Beavers (Charles) and Uncle Charlie Slaughter (Nette) and a host of other relatives and friends. Online condolences may be made at www.ParksBrothersFuneralHome.com.

The family of Carl Luwayne Zackery created this Life Tributes page to make it easy to share your memories.

Funeral services for Carl Luwayne Zackery will be held Saturday,...

Send flowers to the Zackery family.