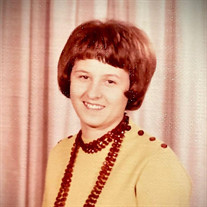 Funeral services for Carolyn Lavern Branscum will be held Saturday, August 14, 2021 at 2:30 PM at the Harrah Church of Christ, Harrah, Oklahoma. Interment will follow at the Highland Cemetery in Okemah, Oklahoma. Carolyn Lavern Branscum was born February 19, 1949 in Hanna, Wyoming to Fred Nathaniel Carson and Oletta Merle (Gee) Carson. She passed away Sunday, August 8, 2021 in Oklahoma City, Oklahoma at the age of 72. Carolyn was a resident of Harrah, Oklahoma and was retired educator and homemaker. She received a Bachelor’s degree in English from East Central University and later a Master’s degree in Special Education with an emphasis in reading from ECU. Carolyn taught at numerous schools throughout her career including, Calvin, Holdenville, Buffalo Valley, Wilburton, Bethel and McLoud Public Schools before retiring in 1997. On December 19, 1970, in Okemah, Oklahoma, she married James Branscum. Carolyn enjoyed gardening, painting, studying her bible and cooking. Most of all she loved spending time with her grandchildren and family. Carolyn will be dearly missed by so many. She is preceded in death by her parents; two brothers, Fred Carson and Delano Carson; two sisters, Vivian Wiley and Sandra Dancosse and one half-sister, Violet Dunaway. Survivors include her husband, James of the home in Harrah; her son, Adam Rhett Branscum and wife Brittany of Houston, Texas; her daughter, Aaron Racheyl Walker and husband Lee of Newalla, Oklahoma; one sister, Virginia Hossfeld of Niagara Falls, New York and five grandchildren, Rylee Drew Walker and Duke Crossley, Carson Keziah Walker, Laine Idella Walker, Rhett James Branscum and Adeline Mae Branscum. Serving as active pallbearers will be Perry Wynn, Darrin Carson, Duke Crosley, Kakio Richardson, Tim Carson and David Mahoney. Services will be under the direction of Parks Brothers Funeral Home of Okemah, Oklahoma and officiated by Dr. Sidney Carter and Bro. David Mahoney. Online condolences may be made at www.ParksBrothersFuneralHome.com.

The family of Carolyn Lavern Branscum created this Life Tributes page to make it easy to share your memories.

Funeral services for Carolyn Lavern Branscum will be held Saturday,...

Send flowers to the Branscum family.