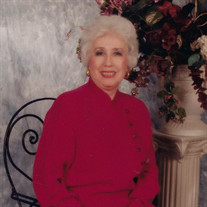 Funeral services for Charlene Marie Underwood will be held Friday, January 28, 2022 at 10:30 AM at the Church of Christ in Okemah, Oklahoma. Interment will follow at the Gracelawn Cemetery in Edmond, Oklahoma at 2:30 PM. On October 16, 1935, George Bynum and Opal (Casey) Bynum welcomed their first child, Charlene, into the world. Charlene was born at home in Micawber, Oklahoma. Her early years were spent helping on the family farm (milking cows, taking care of her younger sister and brother), and attending Mason schools. Charlene graduated from Mason High School in 1953, then went to work at the Okemah National Bank. She was a whiz at typing and calculating numbers. Charlene met Harold Underwood while he was working on the Kelly farm in Mason. They married on July 2, 1955 and moved to Okemah. Some of Charlene’s other jobs included working at the Palace Drug Store and the Okfuskee County Courthouse. For extra money, she picked cotton and picked up pecans. Three daughters were welcomed into the family: Valerie, Jennifer, and Ann. The Underwoods moved to Okmulgee for a brief time in 1967 to be closer to Harold’s job at Tulsa Linen Company. However they missed Okemah and soon moved back, purchasing their first home at 403 South 7th for $9000.00. Harold and Charlene worried and worried how they would ever be able to afford such an expensive house. But they managed and soon their house was a home and a favorite hang-out for the neighborhood kids. Charlene worked at the Okfuskee County Courthouse and then began her life-long career in the banking industry at Citizen’s State Bank. Camping at the Illinois River every summer was something that the whole family looked forward to. Other vacation highlights included a trip to Alabama where the Gulf of Mexico was the first time the Underwoods saw the ocean (and learned not to collect shells and leave them in the car overnight), St. Louis, Tennessee, Arkansas, Colorado, and Red River, New Mexico. In 1980, Harold and Charlene sold their house on 7th Street and moved to Oklahoma City. Charlene worked for Penn Square Bank until it collapsed a few years later. She continued working for Union Bank until she retired in 1993 to take care of Harold while he battled colon cancer. Charlene enjoyed reading, gardening, sewing, and cooking. She made the best German Chocolate Cake as well as scrumptious fried chicken and excelled at sewing. Charlene was a lifelong member of the church of Christ and was always ready to make meals for people who had lost loved ones or had loved ones in the hospital. Everyone who came to her house was always offered a Coke and something to eat. Harold and Charlene became “Pappy and Grandy” to the six most perfect grandchildren that God ever made. The “grands” could absolutely do no wrong and of course, they were the prettiest and smartest grandkids ever. She enjoyed making banana nut muffins for her grands and surprising them with treats and gifts. Charlene also became a “Great-Grandy” to four precious great-grandchildren and she enjoyed them until her health began to fail. On January 14, 2022, Charlene was carried by the angels to her eternal reward in heaven. Waiting for her were Harold, her parents, other family members, and friends. Surviving Charlene are her three daughters, Valerie (Brett) McMahan of Okemah, Jennifer Hayes of Oklahoma City, Ann (David) Jayne of Edmond, as well as her six grandchildren, Andrea (Jeff) Anderson of Okemah, Travis McMahan of Okemah, Rachel Hayes of Denton, TX, Ashley Hayes (Shawn Manley) of Aldie, VA, Ian Jayne of Charlottesville, VA, and Justin Jayne of Edmond/Norman as well as her four great-grandchildren, Camden and Cale Anderson of Okemah, and Hazel and Lukas Manley of Aldie, VA. Charlene is also survived by her sister Cletta (Kenneth) Kinnear, of Meeker, and brother Clayton (June) Bynum of Okemah as well as numerous nieces, nephews and cousins. Although Charlene worked to make the very best home for her family, she also lived for Jesus Christ. She and Harold raised their girls in a Christian home and instilled in them a love for God and to help others. Charlene will be greatly missed, but we know that she has now received her perfect and glorified body. We will see her again. Memorial donations may be made in Charlene’s name to the Okemah Church of Christ, Juvenile Diabetes Research, or the Cystic Fibrosis Foundation. Serving as pallbearers will be Travis McMahan, Jeff Anderson, Ian Jayne, Justin Jayne, Rachel Hayes and Bailey White. Services will be under the direction of Parks Brothers Funeral Home, Okemah, Oklahoma and officiated by Bro. Nicholas Rea. Online condolences may be made at www.ParksBrothersFuneralHome.com.

Funeral services for Charlene Marie Underwood will be held Friday, January 28, 2022 at 10:30 AM at the Church of Christ in Okemah, Oklahoma. Interment will follow at the Gracelawn Cemetery in Edmond, Oklahoma at 2:30 PM. On October 16, 1935,... View Obituary & Service Information

The family of Charlene Marie Underwood created this Life Tributes page to make it easy to share your memories.

Funeral services for Charlene Marie Underwood will be held Friday,...

Send flowers to the Underwood family.