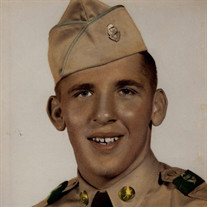 Funeral services for Charles Everett Bramel will be held Monday, October 21, 2019 at 2:00 PM at the Nuyaka Baptist Church. Interment will follow at the Morse Cemetery in Okemah with military honors. Charles Everett Bramel was born December 14, 1933 in Bettsville, Ohio to Vernon and Marietta (Semers) Bramel. He passed away Tuesday, October 15, 2019 at his home near Okemah at the age of 85. After graduating high school in 1951, Mr. Bramel joined the United States Army. He was honorably discharged as a sergeant in 1957 after having served overseas during the Korean War. On November 23, 1957 he married Joan Fuller and in 1959 they had a son, Stan. Mr. Bramel worked at American Standard in Ohio and later with the University of Missouri and the University of Oklahoma. On July 12, 1996 in Eureka Springs, Arkansas he married Sharon Childers. Also in 1996 he retired after thirteen years of employment with OSU Tech. Mr. Bramel loved the outdoors, fishing, hunting, golfing and was a big bowling fan. He is preceded in death by his parents and two brothers, Richard “Tuffy” Bramel Sr. and George Bramel. Survivors include his wife, Sharon Bramel of the home, his son, Stan Bramel and wife Tami of Edmond, Oklahoma; two brothers, Earl Bramel and wife Cathleen of Virginia and Vernon Bramel Jr. and wife Sharon of Kentucky and one sister, Sally Kear and husband Mike of Florida. Serving as active pallbearers will be Ronnie Kirkpatrick, Roger Dyer, Eric Swinford, Dickie Melton, Joe Childers and A.J. Roy. Services will be under the direction of Parks Brothers Funeral Home, Okemah, Oklahoma and officiated by Bro. Wayne Swinford. Online condolences may be made at www.ParksBrothersFuneralHome.com.

The family of Charles Everett Bramel created this Life Tributes page to make it easy to share your memories.

Funeral services for Charles Everett Bramel will be held Monday,...

Send flowers to the Bramel family.