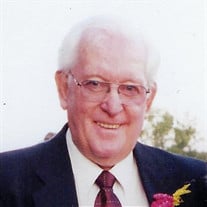 Funeral services for Rev. Charles H. Harelson will be Monday, March 16, 2020 at 2:00 PM at the Victory Christian Center of Okemah, Oklahoma. Interment will follow at the Wilson Salt Creek Cemetery in Okmulgee County. Rev. Charles H. Harelson was born October 4, 1934 in Henryetta, Oklahoma to Charlie E. Harelson and Lora Mae (Hendrix) Harelson. He passed away Tuesday, March 10, 2020 in Henryetta, Oklahoma at the age of 85. Rev. Harelson was a longtime resident of the Okemah area. On June 7, 1952 in Henryetta, he married Mildred L. Tarwater; she later preceded him in death August 28, 2009. He was a minister for over 50 years and was the founder of the Victory Christian Center of Okemah. He enjoyed fishing, hunting and golfing. He especially loved serving the Lord and dearly loved his family. He was a true blessing that will be greatly missed by all who knew him. Also preceding him in death were his parents; two brothers, Richard and Elmer Harelson and two sisters, Virginia Kanada and Frankie Moats. Survivors include his son, Terry Harelson and wife Teresa of Okemah; daughter, Gail Ragsdale and husband James of Glenwood, Arkansas; one brother, James Harelson and wife Irene of Muskogee, Oklahoma; six grandchildren, Jessica Sparkman, Jamie Dixon, Josh Harelson, Justin Ragsdale, Caleb Harelson and Elijah Harelson and six great-grandchildren. Services will be under the direction of Parks Brothers Funeral Home and officiated by Pastor Mike Neal. Online condolences may be made at www.ParksBrothersFuneralHome.com.

The family of Rev. Charles H. Harelson created this Life Tributes page to make it easy to share your memories.

Funeral services for Rev. Charles H. Harelson will be Monday,...

Send flowers to the Harelson family.