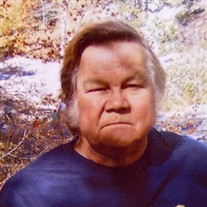 Funeral services for Charles Ray Smith, Sr. will be held Wednesday, October 16, 2019 at 2:00 PM at the Skyview Baptist Church in Okemah. Interment will follow at the Highland Cemetery in Okemah. Charles Ray Smith Sr. was born December 1, 1934. He passed away Sunday, October 13, 2019 in Tulsa, Oklahoma at the age of 84. Charles was a longtime resident of Okemah. He enjoyed carpentry, fishing, hunting and most of all, spending time with his family, friends and his dogs. He is preceded in death by his parents Earl Smith and Georgia Couch; his wife, Pauline Smith and four daughters, Charlene Rich, Cheryl Smith, Mildred Fixaco and Carolyn Wilson. Survivors include his son, Charles Smith Jr and wife Tammy of Henryetta, his daughter, Marla Hutchings and husband Dave of Henryetta; 18 grandchildren, 36 great-grandchildren and 5 great-great-grandchildren. Active pallbearers will be Wayne Smith, Jerry Don Smith, Larry Smith, Charlie Ray Smith, Billy Smith and Leon Smith. Honorary bearers include Gary Dale Smith and Finis Smith. Services will be under the direction of Parks Brothers Funeral Home and officiated by Rev. David Hamilton and assisted by Rev. Charlsie Rich. Online condolences may be made at www.ParksBrothersFuneralHome.com.

The family of Charles Ray Smith Sr. created this Life Tributes page to make it easy to share your memories.

Send flowers to the Smith family.