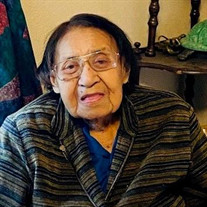 A private family graveside service for Christine Marjorie Henneha will be held Tuesday, December 22, 2020 at 10:00 AM at the Harjo – Henneha Family cemetery near Okemah. Viewing will be Monday, 12:00 – 8:00 PM at the Parks Brothers Funeral Home of Okemah, Oklahoma. Christine Marjorie (Wind) Henneha was born May 9, 1924 to Melissa Harjo in Okfuskee County, Oklahoma. She passed away Thursday, December 17, 2020 in Okemah at the age of 96. Christine was a member of the Muscogee Creek Nation, the Nuyaka Ceremonial Ground and a member of the Wind Clan. She was also a member of the Fishpond Ceremonial Ground. Christine married Harry Henneha and of this union they had six children. During her life, Christine was an advocate for her Muskoke people. Many times she was asked by judges to interpret for her elders who did not speak English. She also helped many people receive their tribal citizenship. Christine was an accomplished bead worker and was known as the “bead lady”. She was also a talented turtle shell maker. Christine loved to sew and would make skirts and outfits for her grandchildren. She was an avid bingo player and liked going to the casinos, yard sales and giving her grandchildren, that attended stompdances, medicine buckets. She is preceded in death by her parents; her husband; her aunt, Lizzie Robison; three uncles, Johnson Harjo, Ebner Harjo and Josiah Harjo; two sons, Harry Henneha Jr. and Leonard Lee Wayne Henneha Sr.; one step son, Charles Henneha and two brothers, Clarence Tiger and Palmer Wolf. Survivors include five daughters, Lucille (King) Joshua of Okmulgee, Earnestine Henneha of Okemah, Wanda (Henneha) Buckley of Okemah; Patricia (Henneha) Johnson of Okemah and Valeria (Henneha) Littlecreek of Okemah; two step-daughters Elsie Martin of Holdenville and Betty Boatman of Seminole; 29 grandchildren, 63 great-grandchildren, numerous great-great-grandchildren as well as a host of nieces and nephews. Serving as active Pallbearers will be Matthew Henneha, Chad Deere, Bryant Beaver, Commanche Beaver, Jonathon Beaver, Echo Butcher, Lee Joshua Jr. and Leonard Henneha Jr. Honorary bearers include Robin Beaver, Sam Beaver Jr., Amos McNac, Ron Goff and Spencer Henneha. Services will be under the direction of Parks Brothers Funeral Home. Online condolences may be made at www.ParksBrothersFuneralHome.com Those who attend the viewing at the funeral home will be required to wear a mask.

The family of Christine Marjorie Henneha created this Life Tributes page to make it easy to share your memories.

Send flowers to the Henneha family.