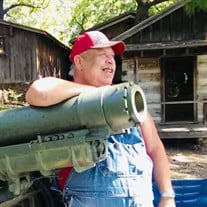 Funeral Services for Clyde Wayne “Silver” Williamson will be held Wednesday, January 27, 2021 at 2:00 PM at the Parks Brothers Funeral Home Chapel in Okemah. Interment will follow at the Sandcreek Cemetery. Clyde Wayne Williamson was born August 8, 1958 in Okemah, Oklahoma to Clyde and Hattie Arlene Williamson. He passed away Sunday, January 24, 2021 at his home in Okemah at the age of 62. Wayne was a longtime resident of the Okemah area. He worked as an oilfield floor hand with Ed Landers and John Walman for 17 years. On December 17, 1980, in Okemah, he married Linda Johnson. Wayne enjoyed watching football, hunting and fishing. Most of all he loved spending time and picking on his kids and grandkids. He is preceded in death by his parents and his brother, Dale Williamson. Survivors include his wife, Linda of the home; two sons, Jerry Leon Williamson and wife Heather of Sand Springs and Alan Wayne Williamson and wife Stacy of Okmulgee; his daughter, Sara Ann Arlene Williamson of Okemah; brothers in law, Steve and Teri Tillery, Trampas and Kay Johnson, Marvin and Michelle Johnson and Wes and Barbara Smith all of Okemah; three sisters, Lynda Carol Howeth of New Castle, Elaine Gallacher of Shawnee and Judy Williamson of Okemah; sister in law, Kim Billings of Okemah and five grandchildren and a host of nieces and nephews. Serving as active pallbearers will be Cody Johnson, Steven Tillery, Jeffrey Brock, Bill Johnson, Bryan Harris and Trevor Billings. Honorary bearers include Harold Howeth, Gary Knowles, Christopher Knowles, Jonny Johnson, Alphones Bradford Jr. and Austin Billings. Services will be under the direction of Parks Brothers Funeral Home and officiated by Sherry Smith. Online condolences may be made at www.ParksBrothersFuneralHome.com

The family of Clyde Wayne "Silver" Williamson created this Life Tributes page to make it easy to share your memories.

Funeral Services for Clyde Wayne “Silver” Williamson will be...

Send flowers to the Williamson family.