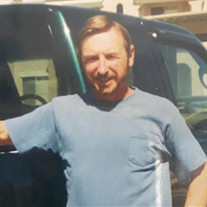 Danny Lee Davis, 73, of Idaho Falls, Idaho passed away March 17, 2021, at MorningStar Senior Living Center after battling Alzheimer’s. Danny was born November 18, 1947, in Okemah, Oklahoma, to Rufus Frank Davis and Dena Lorene (Wallis) Davis. He grew up in Sacramento, California, where he graduated from Highlands High School in the Class of 1966. After graduation, he was drafted in the U.S. Army and fought bravely in the Vietnam War. After returning from Vietnam, Danny was married and moved to Anchorage, Alaska where he was blessed with two daughters, Desiree and Dusty. Danny worked as a truck driver for Consolidated Freightways for many years. After retiring he relocated to Las Vegas for some warm weather. Danny loved country dancing with the ladies and going to rodeos, he especially enjoyed the bull riding. Once Danny became ill, his daughters moved him to Idaho Falls where he lived out his final days. Danny is survived by his loving daughters, Desiree Saupe of Idaho Falls, ID, and Dusty (Mike) Anderson of Eagle River, AK; brother, Rod (Mary) Davis of Truckee, CA; five grandchildren, Anthony (Kristin), Connor (Sarah), Elana, Isabella, and Michael; and 2 great grandchildren Aria and Declan. He was preceded in death by his parents, grandparents, his ex-wife, and many friends. A graveside service will be held at 10:00 AM on May 22, 2021 at the Schoolton Cemetery, Seminole County, Oklahoma with a reception to follow. Online condolences may be made at www.ParksBrothersFuneralHome.com

The family of Danny Lee Davis created this Life Tributes page to make it easy to share your memories.

Send flowers to the Davis family.