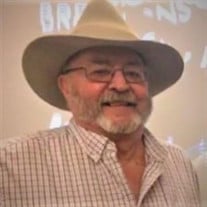 Private family services will be held for Danny “Dan” L. Flanders. Danny L. Flanders was born May 16, 1944 in Shawnee, Oklahoma to Ralph and Grayce Flanders. He passed away Monday, January 11, 2021 at his home in Okemah at the age of 76. A longtime resident of Okemah, Dan was a 1962 graduate of Okemah High School. He received a bachelor’s degree in Agriculture Education from Oklahoma State University in 1967. On January 22, 1965, he married Reba Cope. Dan taught Vo-Ag at Carl Junction High School in Missouri from 1967-83 where he was named teacher of the year. While at Carl Junction, his chapter received the Gold Emblem Chapter award for the top FFA chapter in the state of Missouri numerous times. In 1983 he returned to Okemah and taught Vo-Ag until he retired in 1996. Dan, twice, received the Polaris Award for outstanding teacher chosen by the all-star students. He also received teach of the year award chosen by his peers. After his retirement from education; he managed Citizen’s State Bank, Paden, Oklahoma. Eventually his businesses were growing so rapidly that he decided to concentrate on T & D Meats and Flanders Auction Service. He was active in the community and was inducted into the Okemah Hall of Fame in 2008. He is preceded in death by his parents and one brother, James Ralph “Butch” Flanders. Survivors include his wife, Reba Flanders of the home; his son, Daryl Flanders and wife Dianne of Okemah; daughter, Dana Moritz and husband Brian of Carl Junction, Missouri; five grandchildren, Chase Moritz and wife Meredith, Nick Moritz and wife Lauren, Jake Moritz and wife Ashley, Devin Flanders and wife Kayla and Dalton Flanders and five great-grandchildren, Madelyn, Emma, Caroline, Layne and Gentry. He is also survived by numerous former FFA students that loved him and will miss him dearly. Honorary pallbearers will be Charles Arthur, Robert Spalding, Phil Stacey, Monte Womack, Steve Pritchard and Jim Parks. Services will be under the direction of Parks Brothers Funeral Home, Okemah and officiated by Bert Robison. Online condolences may be made at www.ParksBrothersFuneralHome.com. In lieu of flowers; donations may be made to the Dan Flanders FFA Memorial Scholarship at any BancFirst. This scholarship will be available to any Oklahoma FFA Student to apply. You may also make a memorial contribution to your local FFA chapter.

Private family services will be held for Danny &#8220;Dan&#8221; L. Flanders. Danny L. Flanders was born May 16, 1944 in Shawnee, Oklahoma to Ralph and Grayce Flanders. He passed away Monday, January 11, 2021 at his home in Okemah at the age... View Obituary & Service Information

The family of Danny L. Flanders created this Life Tributes page to make it easy to share your memories.

Send flowers to the Flanders family.