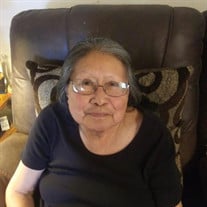 Funeral services for Daria Ann Hicks will be held Monday, June 13, 2022 at 2:00 PM at the Parks Brothers Funeral Home Chapel in Okemah. Interment will follow at the Hicks Family Cemetery in Okemah. Daria Ann Hicks was born October 8, 1949 in Talihina, Oklahoma to Frank Billy and Annie Proctor. She passed away Tuesday, June 7, 2022 in Okemah, Oklahoma at the age of 72. Daria Hicks was a resident of the Hanna and Okemah areas most all of her life. She attended Hanna schools and received her GED then attended OSU IT. She worked for Muscogee Creek Nation as a language teacher. She enjoyed spending time with her family and watching her grandson play basketball. She is preceded in death by her parents, husband, Johnie Lee Hicks; four brothers, John Billy, Daniel Billy, Thomas Billy and David Billy; and one sister, Martha Billy. Survivors include her three daughters, Kristina Davis of the home, Maggie Davis of Hobart, OK and Monica Jacobs and husband Johny of Okemah, OK; one brother, Franklin Lin Billy of Checotah, OK; four sisters, Barbara Case of Texas, Gracine Hicks of Okemah, OK., Gloria Billy of Checotah, OK and Lisa Billy of Checotah, OK..

The family of Daria Ann Hicks created this Life Tributes page to make it easy to share your memories.

Send flowers to the Hicks family.