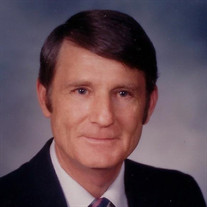 Funeral services for Dolen A.J. Swayze will be held Wednesday, September 23, 2020 at 10:00 AM at the Parks Brothers Funeral Home Chapel in Okemah. Interment will follow at the Highland Cemetery in Okemah. Dolen A. J. Swayze born July 9, 1936 at Bigham, Oklahoma Okfuskee County to Andrew Jackson Swayze and Polly Lucas Swayze died September 21, 2020 in Oklahoma City, Oklahoma. Dolen worked as the manager of Farmers Co-Op prior to being employed by the Oklahoma Department of Transportation and Public Service Company of Oklahoma as a meter reader. He then became a licensed insurance agent before purchasing his own agency, Swayze Insurance Agency from where he retired. Dolen played for and later managed the Okemah Braves Sandlot baseball team in the late 50’s and early 60’s. His favorite pastimes where playing baseball, softball and hunting. He loved his family and especially enjoyed his grandchildren and great grandchildren. He was a past member of the Okemah City Council where he served as mayor, a member of the Okemah Public School Board, Lion’s Club, and Jaycee’s where he served as state vice-president. He was a member of the Okemah Church of Christ. He is preceded in death by his grandson, Brett, his parents, and siblings Lucy Jane Wilbourn, Lee Roy Swayze, Mary Francis Robbins, Anna Jean Dearman, Edward Dale Swayze, Forrest Joseph Swayze, brothers-in-law; Edward Smith and Earl Smith. Survived by his wife of 63 years, Elvania Swayze of the home. Two sons; Terry and Holly Swayze of Holdenville, Jerry and Tina Swayze of Purcell and daughter, Sherry and Bobby Green, of Okemah. Grandchildren; Jerad and Becca Swayze, Brian and Jamie Swayze, Brandon and Shawna Burnett of Okemah, Ryan and Courtney Green of Eufaula, Cole and Paige Swayze of Moore, Haylee Swayze of Houston, Texas, Taylor and Brandi Hignite of Muskogee, and Ty Hignite of Pauls Valley. Great Grandchildren; Andrew, Amber, Camron, Skylar, and Brandon Swayze; Leah and Kylee Green and Eli and Carter Hignite. Siblings Geneva and Joe Vigil of Glenpool, Bobby Joe and Cleo Swayze of Morris, Dwayne and Pat Swayze of Okemah, David and Sue Ramsey of Preston, Jerry Don Swayze of Tulsa and sisters-in-law; Peggy Smith and Pat Smith. And a host of nieces and nephews. Pallbearers: Jerad Swayze, Ryan Green, Brian Swayze, Cole Swayze, Haylee Swayze, Taylor Hignite, Ty Hignite, Brandon Burnett and Brett Green (in absentia). Services will be under the direction of Parks Brothers Funeral Home, Okemah, Oklahoma and officiated by Bro. Bobby Green. Online condolences may be made at www.ParksBrothersFuneralHome.com. Due to the current COVID-19 pandemic; the family would like to request all who are in attendance to please wear a mask and practice social distancing.

Funeral services for Dolen A.J. Swayze will be held Wednesday, September 23, 2020 at 10:00 AM at the Parks Brothers Funeral Home Chapel in Okemah. Interment will follow at the Highland Cemetery in Okemah. Dolen A. J. Swayze born July 9, 1936... View Obituary & Service Information

The family of Dolen A. J. Swayze created this Life Tributes page to make it easy to share your memories.

Funeral services for Dolen A.J. Swayze will be held Wednesday,...

Send flowers to the Swayze family.