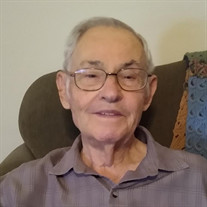 Funeral Services for Donald Clyde Brown will be held Thursday, April 15, 2021 at 2:00 PM at the Parks Brothers Funeral Home Chapel in Okemah. Interment will follow at the Sand Creek Cemetery near Okemah. Donald Clyde Brown was born April 8, 1931 in Okemah, Oklahoma to James Franklin Brown and Dency (Smith) Brown. He passed away Thursday, April 8, 2021 in Prague, Oklahoma at the age of 90. Mr. Brown was a resident of Prague, Oklahoma and a graduate of Bearden High School. He worked many years in the oilfields and later retired from the Oklahoma Department of Transportation. On May 21, 1951, in Okmulgee, Oklahoma, he married Joan Wright; she later preceded him in death. Mr. Brown enjoyed gardening, fishing, traveling and spending time with his grandchildren and family. He was also a member of the Prague Church of Christ. Also preceding him in death were his parents and one sister, Dorothy Atkins. Survivors include his son, Jimmy Don Brown and wife Kathy of Prague; two daughters, Nancy Rosann Crockett and husband Jim of Henryetta and Karen Raelene Childress and husband Mark of Seminole and two grandchildren, Nathan Connor Childress and Kaitlin Erin Childress. Serving as active pallbearers will be Ray Meeks, Jim Crockett, Mark Childress, Nathan Childress, Jimmy Don Brown and Brian Henson. Honorary pallbearer will be Tim Atkins. Services will be under the direction of Parks Brothers Funeral Home, Okemah, Oklahoma and officiated by Bro. Palmer Smith. Online condolences may be made at www.ParksBrothersFuneralHome.com

The family of Donald Clyde Brown created this Life Tributes page to make it easy to share your memories.

Funeral Services for Donald Clyde Brown will be held Thursday,...

Send flowers to the Brown family.