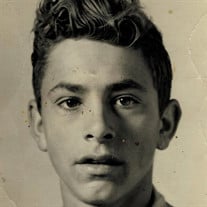 Funeral services for Donald Ray Morphis will be Monday, January 4, 2021 at 2:00 PM at the Parks Brothers Funeral Home Chapel in Okemah. Interment will follow at the Bearden Cemetery. Donald Ray Morphis was born March 1, 1937 in Okfuskee County, Oklahoma to William Francis Morphis and Willie Mae (Harris) Morphis. He passed away Wednesday, December 30, 2020 at his home in Bearden at the age of 83. Donald was a lifelong resident of the Okemah area. He was a gifted farmer who worked many years in the oilfield, drove the Bearden School bus, enjoyed hunting, fishing, spending time with his grandkids and gardening. On January 2, 1959, in Okemah, he married Bessie Mae Underwood. He is preceded in death by his parents and two brothers, Robert and Amos. Survivors include his wife, Bessie of the home; one son, Charles Alvin Morphis of Cromwell; daughter, Jennifer Norton of Holdenville; three brothers, David of Okemah, Gervis of Cromwell and Johnny of Cromwell; four sisters, Mary Underwood of Cromwell, Carolyn Chesser of Wewoka, Helen Ruth Brown of Cromwell and Patsy Morphis of Cromwell; 4 grandchildren and 1 great-grandchild with one on the way. Serving as active pallbearers will be John Wayne Morphis, David Norton, Jimmie Norton, Zachary Cannon, Kody Howe and Jeff Morphis. Honorary bearers will be Mikey Dodson and Kimberly Norton Services will be under the direction of Parks Brothers Funeral Home and officiated by Bro. Richard Underwood and Sister Ruby Nell York. Online condolences may be made at www.ParksBrothersFuneralHome.com. Those in attendance will be required to wear a mask.

The family of Donald Ray Morphis created this Life Tributes page to make it easy to share your memories.

Funeral services for Donald Ray Morphis will be Monday, January...

Send flowers to the Morphis family.