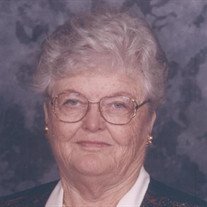 Funeral services for Edna Mae McVeigh will be held Thursday, January 31, 2019 at 3:00 PM at the Parks Brothers Funeral Home Chapel in Okemah. Interment will follow at the Morse Cemetery north of Okemah. Edna Mae McVeigh was born July 24, 1930 in Okemah, Oklahoma to Bud and Cansada (Hiller) Kenneda. She passed away Saturday, January 26, 2019 in Tulsa, Oklahoma at the age of 88. Mrs. McVeigh was a 1947 graduate of Mason High School. She grew up in the Okemah area and was, more recently, a resident of Okmulgee, Oklahoma. She and Berlin L. McVeigh were married January 2, 1947; he later preceded her in death November 3, 2003. Mrs. McVeigh worked in a garment factory in Bristow, Oktronics in Okemah and later retired from Walmart in 1988. She enjoyed attending church, traveling and especially loved spending time with her family and friends. Also preceding her in death were her parents; Bud and Cansada Kenneda; her daughter, Patricia Black; brother, Alvin Kenneda and sister, Geneva Haddox. Survivors include two grandchildren, Phillip Black and wife Laura of Henryetta and Steve Black and wife Julie of Edmond, Oklahoma; four great-grandchildren, Sarah Schram and husband Brandon of Covington, Oklahoma, Rebecca Punto and husband Chris of Broken Arrow, Hayden Black of Tahlequah and Cody Black of Norman and nephew, Jim Haddox of Okemah. Serving as pallbearers Phillip Black, Steve Black, Jim Haddox and Mike Haddox. Services will be under the direction of Parks Brothers Funeral Home of Okemah, Oklahoma. Online condolences may be made at www.ParksBrothersFunrealHome.com.

The family of Edna Mae McVeigh created this Life Tributes page to make it easy to share your memories.

Funeral services for Edna Mae McVeigh will be held Thursday,...

Send flowers to the McVeigh family.