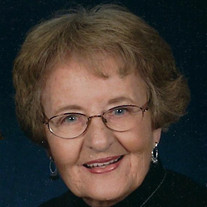 Funeral services for Ellen Frances Wilson will be held at Okemah First Baptist Church, Tuesday, October 13, 2020, at 2:00 PM. A private family interment will follow at Highland Cemetery in Okemah. Ellen Frances Wilson was born April 21, 1930 in the Bryant Community of McClain County, Oklahoma to Marvin Hawkins and Ellen Ruth (Tucker) Hawkins. She passed away Friday, October 9, 2020 at home in Okemah while surrounded by her loved ones at the age of 90. Mrs. Wilson grew up in Wayne, Oklahoma and was a 1948 graduate of Wayne High School. On July 4, 1948 she married the love of her life, Leonard Wilson. They moved to Okemah in 1980 and happily lived there until Leonard preceded her in death on January 31, 2015. Mrs. Wilson also worked part time in the student store for Moore Public Schools. She, along with Leonard, owned and operated Jimmie’s Grocery in Okemah. Mrs. Wilson enjoyed quilting, sewing, cooking, bowling, playing cards, dominoes, and spending time with her family. She was an avid sports fan and was elected to the “1940’s Oklahoma High School All Decade Team”. She was a longtime member of the Okemah First Baptist Church and will be dearly missed by all who knew her. Also preceding her in death were her parents; one daughter, Janet Bridal; two brothers, Harold Hawkins and Eugene Hawkins and one sister, Jo Stauffer. Survivors include her son, Dennis Wilson of Okemah; daughter, Robyn Custar and husband Danny of Okemah; two sisters, Loretta Franks of Okemah, Pat Crist and husband Kerwin of Oklahoma City; four grandchildren, Holly Hay of Spring, Texas, Joshua Bridal of Shawnee, Beau Custar and wife Danielle of Perry, and Ben Custar of Cleveland; three great-grandchildren, Elijah, Halle, and Emmett Custar; son in law, Scott Bridal of Yukon and sisters in law, Elsie Wilson of Seminole and Jeanie Wilson of North Pole, Alaska. Services will be under the direction of Parks Brothers Funeral Home, Okemah, Oklahoma and officiated by Rev. Ledtkey McIntosh. Serving as active pallbearers will be Joshua Bridal, Beau Custar, Benjamin Custar, Paul Franks, Keith Elledge and Ethan Coplin. Online condolences may be made at www.ParksBrothersFuneralHome.com. In lieu of flowers, you may contribute to Okemah Public School Foundation. All in attendance will be required to wear a mask and to practice social distancing.

The family of Ellen Frances Wilson created this Life Tributes page to make it easy to share your memories.

Funeral services for Ellen Frances Wilson will be held at Okemah...

Send flowers to the Wilson family.