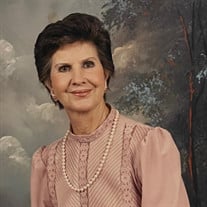 Graveside services for Esther Louise Welcher will be held Saturday, January 16, 2021 at 10:00 AM at the Okfuskee Cemetery. Esther Louise Welcher was born December 4, 1925 in Okfuskee County, Oklahoma to Roy and Letha (Owen) Harris. She passed away Tuesday, January 12, 2021 at her home in Okemah at the age of 95. Mrs. Welcher was a lifelong resident of Okfuskee County and a graduate of Nuyaka High School. On December 5, 1946 in Fort Smith, Arkansas, she married James Verlon Welcher; he later preceded her in death May 27, 1998. Mrs. Welcher owned and operated a restaurant in the 50’s in Okemah. She also operated Welcher’s Meat Processing and Welcher Farms. She was a loving homemaker who was known as “granny” by many, everyone wanted to go eat at granny’s on Saturday. She helped raise generations of kids and grandkids throughout the years whom she loved and thought of as her own. Mrs. Welcher also loved to go dancing, especially with her dear friend Dorothy. She will be dearly missed by many. Also preceding her in death were her parents; three brothers, Vearl Harris, Ernie Harris and Melvin Harris; two sisters, Esta Welcher and Ethel Clay and one great-great-grandchild. Survivors include her two sons, Racy Welcher and wife Linda of Punta Gorda, Florida and Dobie Welcher and wife Susan of Okemah; one daughter, Sheila Welcher of Edmond, Oklahoma; three brothers, Joe, Leon and Kelly; one sister, Erma Jean McFarland; 4 grandchildren, Tina and Ryan Smith, Michelle and Scott Hessman, Summer and David Smith and Rachael and Adam Cooper and 11 great-grandchildren and 4 great-great-grandchildren. Services will be under the direction of Parks Brothers Funeral Home, Okemah and officiated by Jesse Power and music by Terry Edminsten. Online condolences may be made at www.ParksBrothersFuneralHome.com. In lieu of flowers, donations may be made to the Animal Rescue League of Okemah (ARLO). Services will also be live streamed via the Parks Brothers Funeral Home Facebook page.

The family of Esther Louise Welcher created this Life Tributes page to make it easy to share your memories.

Graveside services for Esther Louise Welcher will be held Saturday,...