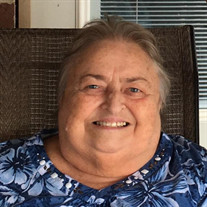 Funeral services for Eunice Fay Bryant will be held Tuesday, June 15, 2021 at 1:00 PM at the First Assembly of God Church of Prague. Interment will follow at the Oakdale Cemetery in Paden, Oklahoma. Eunice Fay Bryant was born January 26, 1949 in Santa Maria, California to Johnny Greer Gammill and Margrett Lamar (Brown) Clonts. She passed away, Friday, June 11, 2021 in Oklahoma City at the age of 72. Fay was a longtime resident of Paden, Oklahoma and a 1967 graduate of Paden High School. She and Floyd Luther Bryant were married November 11, 1966 in Weleetka, Oklahoma. Fay, also known as “Memaw” within her family, loved her family dearly. She blessed many with her loving care and kindness and was not only a great mother to her own children but was a special nanny to others. She never said a bad word about anyone and was always willing to provide care to those in need. She also had a great passion and faith for the Lord and attended the First Assembly of God Church of Prague. Fay enjoyed watching soap operas, cooking, spending time with her family and her dogs. She was a very kind and compassionate person that devoted her life to her church and loving others. She will be dearly missed by all who knew her. She is preceded in death by her parents; her step-parents, Beulah Gammill and Sherman Clonts; her son in law, Corky Leffew; niece, Cheryl Griffith and nephew, Dale Musgrove. Survivors include her husband, Floyd Luther Bryant of Paden; her son, Johnny Bryant and wife Sandra of Paden; daughter, Teresa Bryant-Leffew of Paden; three brothers, Andy Gammill and wife Vickie of Tulsa, Wayne Clonts and wife Debbie of Paden and Larry Reynolds and wife Pam of Paden; four sisters, Mae Martin and husband Marcus of Paden, Gail Fipps and husband Craig of Prague, Clara Welch and husband Paul of Yale; and Regina Barkley and husband Louis of Paden; grandchildren, Kymberlie McCracken and wife Heaven, Jacob Bryant and wife Autumn, Jason Bryant and wife Elizabeth and DaRacee Leffew; one great-grandson, Parker Alton Stephens and one great-grandson on the way, Weston Luther Bryant. Services will be under the direction of Parks Brothers Funeral Home, Okemah, Oklahoma and officiated by Pastor Kevin Wehrli. Online condolences may be made at www.ParksBrothersFuneralHome.com.

Funeral services for Eunice Fay Bryant will be held Tuesday, June 15, 2021 at 1:00 PM at the First Assembly of God Church of Prague. Interment will follow at the Oakdale Cemetery in Paden, Oklahoma. Eunice Fay Bryant was born January 26, 1949... View Obituary & Service Information

The family of Eunice Fay Bryant created this Life Tributes page to make it easy to share your memories.

Funeral services for Eunice Fay Bryant will be held Tuesday,...

Send flowers to the Bryant family.