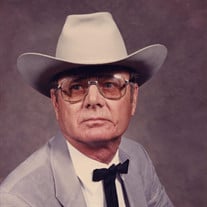 Funeral services for Finnis Pack will be held Tuesday, Feburary 8, 2022 at 2:00 PM at the First Assembly of God Church in Wetumka, Oklahoma. Interment will follow at the Wetumka Cemetery. Finnis Pack was born November 3, 1933 in Weleetka, Oklahoma to William Lester Pack and Myrtle Lee (Lancaster) Pack. He traded his earthly home to go to his heavenly home surrounded by his family on Wednesday, February 2, 2022 at the age of 88. Mr. Pack was a resident of the Wetumka area most all of his life and always considered it home. He married Carol Colene Gann on May 14, 1955 in Wetumka. He was an ordained minister through the Assemblies of God which was truly his life calling having pastored in Oklahoma, Colorado and Oregon. Mr. Pack was a gifted carpenter as well. He and his brothers built countless barns in the area and everyone knew if you need a barn built, just call the “Pack Boys” and they would take care of it. He enjoyed hunting, especially deer hunting, woodworking and playing dominoes. He became a great baker as well and was known for his chocolate turtles. He is preceded in death by his parents, one son in law, Kenny McDaniel; four brothers, Loy, Lewis, Bill and Joseph and three sisters, Ethel Wilcoxson, Bertha Dyer and Dorothy Roberts. Survivors include his wife, Colene Pack of the home; one son, Scott Pack and wife Kirsten of Wetumka; four daughters, Debra McDaniel of Holdenville, Lannie Gail Collins and husband Greg of Buffalo, Wyoming, Kathy Flint and husband Don of Holdenville and Nina Stapp and husband Bryan of Wetumka; two brothers, Denver “Dee” Pack and wife Coleena of Wetumka and Harvey Pack and wife Violet of Wetumka; 18 grandchildren, Donna Anderson, Michael McDaniel, Brooke and Bill McCarron, Cody and Lauren Collins, Dylan and Ashley Stapp, Stan and Allie Stapp, Audy and Angela Stapp, Kasey Pack, Wyatt Pack, Erin and Anthony Logan, Caleb Mills and Jacob Mills and 13 great-grandchildren, Garrett Anderson, Makena Anderson, Chloe Collins, Kit Collins, Maggie McCarron, Liam Stapp, Sawyer Stapp, Easton Stapp, Jaden Stapp, Braden Stapp, Caden Stapp, Haden Stapp and Oakley Logan. Serving as pallbearers will be grandsons and great-grandson. Services will be under the direction of Parks Brothers Funeral Home, Wetumka, Oklahoma and officiated by Pastor Bo Gibbs and Pastor Curt Bellinger. Online condolences may be made at www.ParksBrothersFuneralHome.com.

Funeral services for Finnis Pack will be held Tuesday, Feburary 8, 2022 at 2:00 PM at the First Assembly of God Church in Wetumka, Oklahoma. Interment will follow at the Wetumka Cemetery. Finnis Pack was born November 3, 1933 in Weleetka,... View Obituary & Service Information

The family of Finnis Pack created this Life Tributes page to make it easy to share your memories.

Funeral services for Finnis Pack will be held Tuesday, Feburary...