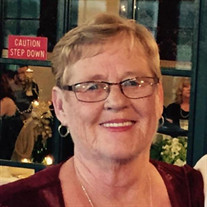 Graveside services for Francis Kaye Lee will be held Friday, January 22, 2021 at 2:00 PM at the Highland Cemetery in Okemah, Oklahoma. Francis Kaye Lee was born March 29, 1947 in Henryetta, Oklahoma to A.B. Brock and Mary Ellen (Lawson) Brock. She passed away Saturday, January 16, 2021 at her home in Okemah at the age of 73. Kaye was a longtime resident of Okemah and attended Okemah High School. She later received a bachelor’s degree from East Central University. On January 25, 1964 she married Kenneth Dale Lee in Okemah; he later preceded her in death on July 8, 2013. Kaye worked with eldercare for the State of Oklahoma Health Department and with George Nigh Rehabilitation Center in Okmulgee. She was also the owner and operator of Lee’s Furniture of Okemah and B-Line Yamaha of Okmulgee and was a licensed real estate agent and cosmetologist. She was a talented seamstress and enjoyed sewing and collecting ladybugs. Kaye was an avid reader, member of the Okemah Church of Christ and will be dearly missed. Also preceding her in death were her parents; son in law, Clint Armstrong and brother in law, Sam Wilson. Survivors include her two sons, Wayne Lee and wife Paige of Stillwater and their children, Kate and Erik Odom and children, Margot and Elle, Abigail and Noah Roberts, Megan and Wyatt Bonicelli and child Henry, Zachary Lee and Jackson Lee, Robby Lee and wife Jackie of Ada and their children, Robbi Dawn and Aaron Moore, Alyssa “A.J.” Lee and Caitlyn “C.J.” Lee; one daughter, Laura Armstrong and Joel Beck of Okemah and children, Ethan Beck and Jacob Beck; three brothers, Eugene Brock of Salulda, North Carolina, Mike Brock and wife Vicki of Oklahoma City and Shane Brock and Troy Wilson of Oklahoma City; sister, Beverly Taylor and husband Johnny of Panama City, Florida; sisters in law, Linda Wilson and Paula and Royce Sayre of Okemah; brother in law, Jim and Nancy Lee of Henryetta and a host of nieces and nephews. Viewing will be Tuesday, 12:00 PM – 5:00 PM, Wednesday, 9:00 AM – 5:00 PM and Thursday 9:00 AM – 5:00 PM. Services will be under the direction of Parks Brothers Funeral Home, Okemah and officiated by Bobby Green. Online condolences may be made at www.ParksBrothersFuneralHome.com.

The family of Francis Kaye Lee created this Life Tributes page to make it easy to share your memories.

Graveside services for Francis Kaye Lee will be held Friday,...

Send flowers to the Lee family.