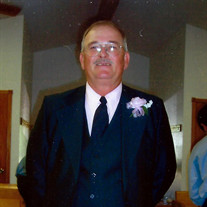 Funeral services for Fred L. Carson will be held Wednesday, April 7, 2021 at 2:00 PM at the Parks Brothers Funeral Home Chapel in Okemah. Interment will follow at the Highland Cemetery in Okemah. Fred L. Carson was born January 1, 1951 in Hanna, Wyoming to Fred N. and Oletta Merle Carson. He passed away Friday, April 2, 2021 at his home in Okemah at the age of 70. Fred was a longtime resident of Okemah. On February 18, 1977, in Okemah, he married Marilyn Willis. He proudly served his country for eight years with the United States Army. He was a graduate of Oklahoma State University in Okmulgee and was in the top three of the dean’s honor roll. He worked as an electrician, worked for the Department of Corrections and hauled asphalt and gravel for Cambell Asphalt in Oklahoma City. He was also a certified welder and often joked he learned to weld by being an electrician. Fred worked as a police officer for Wewoka, Okmulgee and Weleetka and as a deputy sheriff in Okfuskee County. Fred was a talented cabinet maker and knife maker. He was ordained April 30, 2002 and received a doctorate from Harvest International Theological Seminary on January 20, 2010. He was the pastor for the past 19 years of the Christian Temple Church of Okemah. Fred enjoyed playing softball, being outdoors and was an avid hunter and fisherman. He said the biggest catch of his life was his wife Marilyn. He is preceded in death by his parents; one brother, Delano Carson and two sisters, Vivian Wiley and Sandra Dancosse. Survivors include his wife, Marilyn Carson of the home; his son, Darrin Carson and wife Jill of Oklahoma City; two daughters, Carrie Robb and husband Jeff of Newalla, Oklahoma and Olletta Carson of Glendale, Arizona; two sisters, Carolyn Branscum and husband James of McLoud, Oklahoma and Virginia Hossfeld of Niagara Falls, NY and 6 grandchildren, Brooke, Makenzie, Audrey, Grady, Wyatt and Tyler. Serving as active pallbearers will be Todd Ragsdale, Steven Tillery, Todd Magness, Lee Walker, Lee Vick and Adam Branscum. Honorary bearers include Jack Madding, Mike Ishmael and Robert Brinkley. Services will be under the direction of Parks Brothers Funeral Home and officiated by Bro. Frank Brummett and Bro. James Branscum. Online condolences may be made at www.ParksBrothersFuneralHome.com.

Funeral services for Fred L. Carson will be held Wednesday, April 7, 2021 at 2:00 PM at the Parks Brothers Funeral Home Chapel in Okemah. Interment will follow at the Highland Cemetery in Okemah. Fred L. Carson was born January 1, 1951 in... View Obituary & Service Information

The family of Fred L. Carson created this Life Tributes page to make it easy to share your memories.

Send flowers to the Carson family.