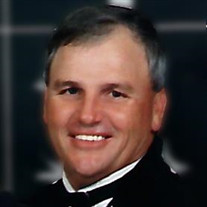 Funeral services for Garrett Eugene Duke will be held Friday, February 28, 2020 at 2:00 PM at the First Baptist Church in Okemah. Interment will follow at the Highland Cemetery also in Okemah. Garrett Eugene Duke was born March 26, 1949 in Prague, Oklahoma to Bryan Eugene Duke and Oleta Maxine Davis. He passed away Sunday, February 23, 2020 in Oklahoma City at the age of 70. Garrett was a lifelong resident of Okemah and a 1967 graduate of Okemah High School, where his loyalty remained. He earned a Bachelor’s degree in Business Administration from the University of Central Oklahoma. On April 9, 1971, he married the love of his life, Brenda Elaine Walker. Garrett retired in 2010 after 20 years of employment with the Oklahoma Department of Transportation. He also retired from the Oklahoma Army National Guard 120th Engineers. He was a loyal supporter and avid fan of Okemah School Athletics and was involved with the Okemah Panther Pride Booster Club. He enjoyed hunting, fishing, and noodling. Garrett was involved in the community of Okemah. He was a member of the Okemah Jaycees, American Legion, Okemah Alumni Association and with the Okemah Little League, where he coached teams for 2 and a half decades. He will be dearly missed by all who knew him. He is preceded in death by his father, Bryan Duke, his mother, Oleta Moore and her husband Leslie and his grandparents, Garrett and Gladys Davis. Survivors include his wife, Brenda Duke of the home; his three sons, Garrett E. Duke of Okemah, Brandon Duke and wife Dee Ann of Okemah and Christopher Duke of Sapulpa; two brothers, David Duke and wife Kay of Okemah and Roger Moore and wife Melissa of Blackwell, Oklahoma; two sisters, Tammy Reese and husband Alan of Nardin, Oklahoma and Lisa Kadavy and husband Kevin of Edmond, Oklahoma and four grandchildren, Dakota Leslie Duke of Okemah, Dylan Walker Duke of Okemah, Maddie Duke of Norman and Sutton Elaine Duke of Sapulpa. Serving as active pallbearers will be Garrett Duke, Brandon Duke, Christopher Duke, Dylan Duke, Donnie Henson, Bryan Allen Duke, Jared Reese, Hunter Moore, Kaleb Kadavy, Bryan Eugene Duke, and Rocky Duke. Services will be under the direction of Parks Brothers Funeral Home and officiated by Rev. Fred Carson and assisted by Don Ross. Online condolences may be made at www.ParksBrothersFuneralHome.com.

The family of Garrett Eugene Duke created this Life Tributes page to make it easy to share your memories.

Funeral services for Garrett Eugene Duke will be held Friday,...

Send flowers to the Duke family.