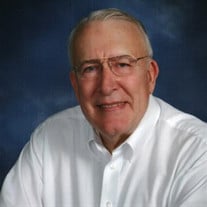 Gary Dean Baker was born in Okemah, Oklahoma on December 7, 1940 to Morris and Thelma (Jones) Baker and went home to be with his Lord and Savior March 12TH, 2018. During high school in Jenks, Oklahoma, he met the love of his life, Elizabeth Dieudoneé Dikeman. They married and just recently celebrated their 59th anniversary. To this union they had 3 children, Denise, Lorrie and Lance. Gary attended North Eastern State after graduating high school in 1958. He then joined the Air Force in 1959, serving as an Air Police Officer at Clark Air Force Base in the Philippines until March 1962. Upon returning, he sold insurance for a short time before embarking on a 35-year employment with what is now Koch Industries. Starting as a Mechanics’ Helper, working his way up the ranks, Gary was promoted to a dozen or more positions, including Pipeliner, Gager, Chief Gager, Superintendent, Division Manager, and Vice-President of Koch Pipeline. These promotions resulted in transferring to different cities and states, which was not a problem with Gary and family. This led him and his family on a multi-state life journey, creating lifetime friendships, moving many times through the Kansas, Texas and Oklahoma communities. His most exciting voyage was his work in Alaska developing a crude oil gathering system on the North Slope in 1970. In 1984, Gary was promoted within Koch Industries in Wichita, Kansas, reaching his highest position as President of Koch Services, working until retirement in 1999. When he was not working, Gary found relaxation in a number of hobbies. He was an avid cook and entertainer. In the 70s, before house flipping was cool, he endeavored in several projects, eventually building his home. He loved being outdoors and spending quality time camping with his kids and grandkids. They added many miles to their RV, traveling from state-to-state to watch grandkids participate in various sports and activities. Gary inherited his green thumb from his parents; he spent his evening hours outside gardening his favorite vegetables. Wherever he moved, if there was a plot of land, he would plant something. In 1997, while still working for Koch Services, Gary experienced his first major heart attack, leaving him with congestive heart failure. He continued to work until 1999. Retirement for Gary was his dream house with 11 acres in Ponca City, Oklahoma, He wanted a central location for family and friends to be able to come and enjoy his hospitality. He could make a mean breakfast that filled you up until supper time. Hosting several family reunions, alumni class get-togethers and most importantly, he loved having his children, grandchildren and their friends visit often. His family and friends spent countless hours gathered around him at the dinner table—listening to him reminisce on his family memories, laughing at his witty jokes, and learning many life lessons. A firm believer in his faith, Gary was a member of the First Christian Church, where he spent his time volunteering as a server for Friendship Feasts, and enjoyed companionship with his Pastor. On the reverse end of the spectrum, Gary and Liz particularly enjoyed going to get “BBQ,” which was code for hitting the slots at the casino. After facing another stroke in 2008, his congestive heart failure progressed, and Liz began showing the signs of what was later diagnosed as Lewy Body Dementia. The care and upkeep of their home in Ponca City became a challenge. Gary and Liz relocated to Bedford, TX in 2014. He is survived by his loving wife Liz Baker, currently residing in a Memory Care facility receiving 24 hour care; daughters: Denise and William Weber, Bedford, TX, Lorrie and Karl Chavez, Towanda, KS, and son Lance and Cindy Baker, Bedford, TX. Preceding his death are his parents Morris and Thelma Baker, baby brother James Morris Jr., and his many loyal dogs he loved throughout the years. Grandchildren: Lucas Baker, Estes Park, CO, Candace (Chad) Baker Hannon, Christian (Jacob) Baker Reynolds, Denae Weber, all of Bedford, TX, Cole Baker (Kaitlyn), Keller, Chad Dueitt (Phiphi), Dallas, TX, Derian Weber, Dallas, TX and Tony Chavez, Cedar Rapids, Iowa. Great-Grandchildren; Ashton Baker, Westwood, KS, Jaxson and Grayson Reynolds, Emerson Hannon and Evelyn Reynolds (due May 2018) all of Bedford, TX. Siblings: Sue Featherston, Tulsa, OK, Dolores Baker, Jenks, OK, Greg (Pat) Baker, Tulsa, OK. Also surviving are his nieces and nephews, cousins, extended Baker and Jones families, his many, many friends from each and every part of his life, and his faithful, four-legged companion, Karlee. Gary Dean Baker - Celebration of Life Visitation: 5-7 pm on Friday, March 16, 2018 at the Parks Brothers Funeral Home. Family & Friends Luncheon: 11:30am on Saturday, March 17 Celebration Service: 1:00 pm on Saturday, March 17, 2018. Burial immediately following service at Highland Cemetery in Okemah, Oklahoma. Visitation, Meal and Service will all be held at the Parks Brothers Funeral Home 301 North Third Street Okemah, Oklahoma 74859 Following burial, there will be coffee and desserts at the Sacred Grounds Brew Shop for all who can stay to visit and reminisce. Memorial can be directed to your favorite local animal shelter.

Gary Dean Baker was born in Okemah, Oklahoma on December 7, 1940 to Morris and Thelma (Jones) Baker and went home to be with his Lord and Savior March 12TH, 2018. During high school in Jenks, Oklahoma, he met the love of his life, Elizabeth... View Obituary & Service Information

The family of Gary Dean Baker created this Life Tributes page to make it easy to share your memories.

Send flowers to the Baker family.