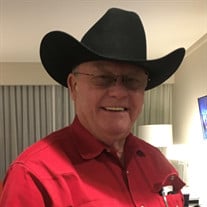 Funeral services for Gary Wayne Franks will be held Friday, February 19, 2021 at 2:00 PM at the Parks Brothers Funeral Home in Okemah, Oklahoma. Gary Wayne Franks was born June 28, 1947 in Okemah, Oklahoma to Luther Roy Franks and Helen Groves. He passed away Friday, February 12, 2021 at his home at the age of 73. Gary was a lifelong resident of the Okemah area and a graduate of Nuyaka High School. He was born and raised on a farm and got his first taste of ranching when he bought his first cow at the age of 8. At the age of 17, he began working for a Steel factory in Tulsa for $1.38/hr and stuck it out for 17 years. He then went to work for the Boley Correctional Facility, all the while coming home to ranch every night. After 13 years there, he decided he wanted to be his own boss and full-fill his dream of ranching full time. On September 15, 2007, at his home north of Okemah, he and Cathy (Gordon) were married and Gary began to live life in a whole new way. In 2009, he and Cathy bought the Highway Liquor Store in Okemah and embarked on a new business adventure he would come to love dearly. Ranching was Gary’s passion, there’s no doubt. He loved spending time showing and working his ranch with his son-in-law, Jarod and his grandsons, Tuff and Ryder. Highway Liquor gave Gary the opportunity to build relationships with the patrons over many years. He enjoyed learning the business and growing it immensely. Gary enjoyed traveling with Cathy and taking trips with the grandkids. He loved road trips and cruises, but his favorite was to fly. Gary loved Cathy very much and made sure that she knew it by showering her with flowers every chance he got. Gary was adamant that Tuff and Ryder grow up in the country where they could be country kids and learn lifelong lessons he passed along. He loved watching those boys grow and learn new things, but he especially loved their adoration. Gary was larger than life and enjoyed making memories with family and friends who will miss him dearly Survivors include his wife, Cathy Franks of the home; four daughters, Cary Kerbs and husband Brian of Hawaii, Cory Houdmann and husband Justin of Texas and Katie Bedwell and husband Jarod of Okemah and Karie Allen of Oklahoma City; his son, Skeeter Franks of Texas; two sisters, Darla of Asher, Oklahoma and Lynn of Shawnee; 5 grandsons and two great-grandsons. He is also survived by his aunt, Leta Mae Baldwin of the home. Serving as active pallbearers will be Jarod Bedwell, Keith Walker, Brian Moody, Carl Walker, Mark Bean and Greg Scott. Honorary bearers will be Roger Walker, Darrell Walker, Gallen Walker, Lloyd Pickering, Larry Sanders, Bobby Holderby and James Wortham. Services will be under the direction of Parks Brothers Funeral Home and officiated by Roger Thompson. Online condolences may be made at www.ParksBrothersFuneralHome.com.

The family of Gary Wayne Franks created this Life Tributes page to make it easy to share your memories.

Send flowers to the Franks family.