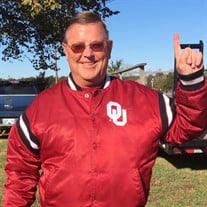 Gerald Leo Ayres was born March 7, 1948 in Los Angeles, California to Leo and Grace Ayres. From his home, he took his Lord and Savior’s hand on April 4, 2020 and peacefully left his earthly life with his wife by his side. Gerald lived in Okemah most of his life except for a short time in Chicago. He owned and operated several food establishments in Okemah, namely the Dairy Boy and the K-Bar Restaurant. He later owned and operated Ayres Service Center for 25 years before he sold the business and retired on May 1, 2019. He was a very honest and dedicated business man. He often appeared grumpy but was very kind and generous man. Gerald looked forward to Christmas time when he received a bag of goodies from Bearden School. Gerald liked talking to his buddies, riding his tractor on his land and keeping his lawn in tip top shape. He also enjoyed watching the University of Oklahoma play ball and attended St. Paul’s Episcopal Church of Holdenville. He is preceded in death by his parents. Survivors include his wife, Cyndi; two sons, James Ayres and David Ayres and wife Brooke; grandchildren, Luke, David Mark, Jacob, Isaac, Colton, Cayden and Haley; his sister, Shirley Jones and nephews, John and Justin Jones. He is also survived by his two cats, Ms. Kitty 1 and Ms. Kitty 2 and many cousins and dear friends. The family would like to thank the kind folks in the Bearden Community who offered their generosity by sitting with Gerald, bringing food, calling and caring. A very special thanks to Heartland Home Health, especially Jan and Linda. A celebration of Gerald’s life will be announced and held at a later date. In lieu of flowers; please make donations in Gerald’s memory to Heartland Home Health, 2802 N. Kickapoo, Shawnee, OK 74804 or to Bearden School to help with Christmas candy. All arrangements were handled by Parks Brothers Funeral Home. Online condolences may be made at www.ParksBrothersFuneralHome.com.

Gerald Leo Ayres was born March 7, 1948 in Los Angeles, California to Leo and Grace Ayres. From his home, he took his Lord and Savior&#8217;s hand on April 4, 2020 and peacefully left his earthly life with his wife by his side. Gerald lived... View Obituary & Service Information

The family of Gerald Leo Ayres created this Life Tributes page to make it easy to share your memories.

Send flowers to the Ayres family.