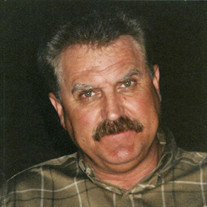 Funeral services for Gerald E. Hacker Sr. will be held Tuesday, December 31, 2019 at 2:00 PM at the Parks Brothers Funeral Home Chapel in Okemah, Oklahoma. Interment will follow at the Keokuk Falls Cemetery south of Prague, Oklahoma. Viewing and visitation will be Monday, 12:00 – 8:00 PM at the Parks Brothers Funeral Home, Okemah. The family will greet friends and family, Monday 6:00 – 8:00 PM also at the funeral home in Okemah. Gerald E. Hacker Sr. was born May 1, 1952 in Oklahoma City, Oklahoma to Glen E. Hacker and Marguerite (Severs) Hacker. He passed away Monday, December 23, 2019 in Paden, Oklahoma at the age of 67. Gerald was a resident of Paden since 1980, and a 1970 graduate of Southeast High School in Oklahoma City. He retired after 19 years of truck driving, and was a member of the Temple of Praise Church of Seminole, Oklahoma. Gerald was an avid coon hunter and was a member of the Oklahoma Coon Hunters and Wolf Hunters Association. He also enjoyed deer hunting and was an expert houndsman. Gerald was a true outdoorsman, who loved to fish, noodle and raise goats. He was a great story teller, and absolutely loved spending time with his grandchildren. He will be dearly missed by all who knew him. He is preceded in death by his parents. Survivors include his three sons: Gerald Hacker Jr. and wife Ginny of Prague, Oklahoma, Paul Hacker and wife Melissa of Stillwater, Oklahoma and Thomas Burton of Seminole, Oklahoma; his daughter, Becki Perry and husband Aaron of Paden, Oklahoma; his best friend, Dana Ellis of Paden, Oklahoma; brother, Glen E. Hacker and wife Beth of Oklahoma City and fourteen grandchildren: Kaylee May, Haley Jo and Jake Hacker; Lexi, Dayson and Kyler Hacker; Dillon, Daisy May, Colton and Cody Perry; Bailey and Brandon Burton; and Buster and Lesley Ellis. Serving as active pallbearers will be Gerald Hacker Jr., Paul R. Hacker, Thomas Burton, Aaron Perry, Bailey Burton, Brandon Burton, Steve Hacker and Rodney Fowler. Honorary pallbearers include Dayson Hacker; Dillon, Colton and Cody Perry; Jake Hacker, Buster Ellis, Leon McCoy, Jim Beel and Eddie Hacker. Services will be under the direction of Parks Brothers Funeral Home, Okemah, Oklahoma and officiated by Pastor Jeff Nance. In lieu of flowers; memorials in Gerald’s name may be made to the Paden Young Farmers and Ranchers. Online condolences may be made at www.ParksBrothersFuneralHome.com.

The family of Gerald E. Hacker Sr. created this Life Tributes page to make it easy to share your memories.

Send flowers to the Hacker family.