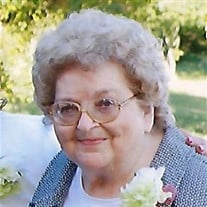 Graveside services for Geraldine Laveda Jeter were held Monday, June 17, 2019 at 10:00 AM at the Highland Cemetery in Okemah, Oklahoma. Geraldine Laveda Jeter passed away peacefully in Shawnee, Oklahoma on Friday, June 14, 2019 at the age of 93. Geraldine was born on September 6, 1925 in Sasakwa, Oklahoma and was a graduate of Okemah High School. She married her sweetheart, Cody Jeter on August 20, 1948 in Okemah, Oklahoma. Geraldine was accomplished at cooking, sewing, yardwork and home repair. She often liked to cook for her family and grandchildren. Geraldine was kind, generous and dedicated to her family and loved hearing funny stories and laughing. She was a longtime resident of Okemah and member of the First Baptist Church of Okemah. She is preceded in death by her parents, Alverda May Johnson and Luther Rutledge; her husband, Cody Jeter and brothers, Orville Wayne Rutledge, Bob Rutledge and Walter Rutledge. Survivors include her children, Cody Randal Jeter of Okemah; Judy Reeves and husband Charlie of Okemah; grandchildren, Charle Jean Reeves of Okemah, Zachary Reeves of Okemah, Christopher Reeves and wife Tara Nicole Reeves of Checotah; great-grandchildren, Ava Reeves and Jaxon Reeves of Checotah; sisters in law, Barbara June Jeter of Henryetta and Faye Rutledge of Euless, Texas and several nieces and nephews. Services were under the direction of Parks Brothers Funeral Home, Okemah, Oklahoma and officiated by Rev. Tara Nicole Reeves. The family would like to thank her special caregiver and friend, Gayle Tillery for her care and dedication. Online condolences may be made at www.ParksBrothersFuneralHome.com.

The family of Geraldine Laveda Jeter created this Life Tributes page to make it easy to share your memories.

Send flowers to the Jeter family.