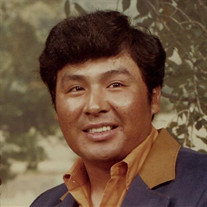 Funeral services for Gilbert H. Franklin will be held Saturday, June 26, 2021 at 2:00 PM at the Parks Brothers Funeral Home Chapel in Okemah. Interment will follow at the Unah Family Cemetery south of Cromwell. Gilbert H. Franklin was born November 30, 1949 in Talihina, Oklahoma to Henry and Edith (Byington) Franklin. He passed away Tuesday, June 22, 2021 in Tulsa, Oklahoma at the age 71. Gilbert was a resident of the Okemah area all of his life. He and Lucille Unah were married August 15, 1969; she later preceded him in death on November 13, 2007. Gilbert worked many years as a heavy equipment operator and most recently with Okmulgee County. He enjoyed playing guitar, working on vehicles and going to the casino. He loved traveling with his wife, Lucille, and attending gospel singings. Gilbert was a hard worker and was always staying busy. He will be dearly missed. Also preceding him in death were his parents; one daughter, Donna Givens; one grandson, Joshua Jackson; two brothers, Arbin Franklin and Wilburn Franklin and five sisters, Katherine Franklin, Susan Morris, Wanda Penda, Henryetta Franklin and Joan Regalado. Survivors include three sons, Eric Franklin, Jeff Gilbert Franklin and Nathan Franklin all of Okemah; his daughter, Melanie Franklin of Mannford; one brother, Michael Merrill of Denver, Colorado; two sisters, Lena Franklin and Betty Franklin of Oklahoma City; 15 grandchildren and 11 great-grandchildren. Services will be under the direction of Parks Brothers Funeral Home, Okemah, Oklahoma and officiated by Bro. Wayne Harjo. Online condolences may be made at www.ParksBrothersFuneralHome.com.

The family of Gilbert H. Franklin created this Life Tributes page to make it easy to share your memories.

Funeral services for Gilbert H. Franklin will be held Saturday,...

Send flowers to the Franklin family.