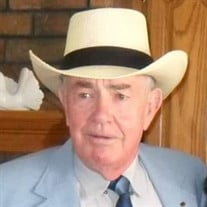 Graveside services for Gilbert Wayne Young will be held Saturday, September 18, 2021 at 11:00 AM at the Bearden Cemetery with Rev. Andy Young officiating. Gilbert Wayne Young was born in Hughes County, Oklahoma August 30, 1934, to Garland Young and Birdie Marie (Minter) Young. He passed from this life, September 8, 2021 at his home in Edmond, Oklahoma at the age of 87. Gil married the love of his life, Jana Lee Turnham, February 12, 1954 in Wewoka, Oklahoma. She preceded him in death June 29, 2017. Gil grew up in and around Wetumka, Sam’s and Butner, Oklahoma. He was a graduate of Butner High School in 1953, an All-Star and All-State basketball player and lettered in baseball. He continued his education at East Central College in Ada which later landed him a job with Dowell. Gil, Jana and their family enjoyed the years following with time spent at the lake, sport events, baseball games, bowling and family activities. Gil was absolutely a trooper by tending to the needs of Jana as her health had taken a huge hit early. He saw to her without complaint and faithfully tended her ever need until her passing. He is survived by one son, Geff Young of Edmond, Oklahoma; four grandchildren, six great-grandchildren, two brothers, Robert Young of Niedernhausen, Germany and Andy Young of Bearden, Oklahoma; two sisters, Rebecca George of Sasakwa, Oklahoma and Audrey Arnold of Bowlegs, Oklahoma and one aunt, Wilda McCormick of McAlester, Oklahoma. Gil was also preceded in death by one daughter, Linda Gragg; one son, Gary Young and two sisters. Gil and Jana both were very active with various clubs in their communities to better the way of life for their children’s future. Gil’s position with Dowell really took off and he advanced in the ranks to Engineer/Salesman. After 35 years of service, Gil retired in 1988 at Edmond, Oklahoma as an engineer with Dowell, a division of Dow Chemical. His retirement years soon gave way to another title. He became known in Edmond as Mr. Gadget, Mr. Fixit and the neighborhood Go To Guy for anything that needed repairs from the autos, lawn mowers, motorcycles, bicycles, to the dripping faucets and clogged drains. He was also a great friend, neighbor, mediator, and confidante and problem solver. He never saw a stranger nor turned his back on those in need and will be truly missed by all. Services will be under the direction of Parks Brothers Funeral Home. Online condolences may be made at www.ParksBrothersFuneralHome.com.

The family of Gilbert Wayne Young created this Life Tributes page to make it easy to share your memories.

Graveside services for Gilbert Wayne Young will be held Saturday,...

Send flowers to the Young family.