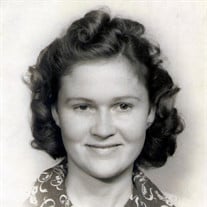 Graveside services for Gladys Brondeen George will be held Monday, August 17, 2020 at 12:00 PM at the Bearden Cemetery. Gladys Brondeen George was born August 7, 1922 in Okfuskee County, Oklahoma to William Perry Crawford and Mamie Etta (Grady) Crawford. She passed away Thursday, August 13, 2020 in Okemah, Oklahoma at the age of 98. Gladys was a longtime resident of the Bearden area. After her young mother died, she took over the responsibility of her seven younger siblings and the running of the household at the age of 12. Her sister Amber, said “she was a good little mother. She cooked, made most of our clothes, kept house, did the family laundry on a rubboard and also helped in the field.” During WWII, she became a “Rosie the Riveter” and helped build aircraft at the Douglas Aircraft plant located in Midwest City, which later became Tinker AFB. In Okemah, she worked at the Okfuskee County Hospital, Montgomery Ward and Wrangler. She also worked at the Sylvania plant in Shawnee. Gladys was an accomplished artist and she loved to quilt. She was also a member of the Okemah Church of Christ. Gladys married Robert Sim George on January 1, 1943. He preceded her in death on August 13, 2008. She was also preceded in death by her parents; one brother, Vurlin Crawford; four sisters, Ramona Beach, Nellie Ricketts, Ruby Ryals and Rosa Lee Erhart. Survivors include her two sons, Robert W. George and wife Rita of Bearden and Garry M. George of Bearden; four grandchildren, Brennan George and wife Stephanie of Drummond, Oklahoma, Amanda Stevenson of Bearden, Matthew George and wife Audra of Oklahoma City and Rebecca Williams and husband James of Bearden; nine great-grandchildren, William, Damian, Madison, Kennedy, Maddox, Brooklyn, Georgiana, Stryker and Ketch; two great-great-grandchildren; two sisters, Amber Ott and Fay Cravens of Okemah and one brother, Sturlin Crawford. Serving as active pallbearers will be Brett McMahan, Bobby Green, Garry George, Robert George, Brennan George, Matt George, James Williams and Bill Shandy. Services will be under the direction of Parks Brothers Funeral Home. Online condolences may be made at www.ParksBrothersFuneralHome.com.

The family of Gladys Brondeen George created this Life Tributes page to make it easy to share your memories.

Graveside services for Gladys Brondeen George will be held Monday,...

Send flowers to the George family.