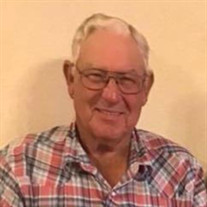 Graveside services for Gus Dennis Stuckey Sr. will be held Wednesday, October 7, 2020 at 10:00 AM at the Weleetka Cemetery. Gus Dennis Stuckey Sr. was born December 18, 1944 in Wetumka, Oklahoma to Willis Dennis Stuckey and Patsy (Kennedy) Stuckey. He passed away Friday October 2, 2020 at the age of 75. Dennis was a longtime resident of Weleetka. He and Carolyn Sue Ogle were married May 14,1962 in Wetumka, Oklahoma. He and Sue moved to California in 1963 before returning to Weleetka in 1977. He worked many years as a truck driver having owned and operated Stuckey’s Hauling since 1981. He was a 32nd degree mason with the Weleetka Masonic Lodge and was also very active in the community. Dennis was the volunteer fire department chief for 20 years and former Head Marshall of Pride Day. He loved Weleetka Football having worked the sidelines with the chain crew for 20 years. He also enjoyed hunting, fishing, playing golf and Thursday night cards. He will be dearly missed by all who knew him. He is preceded in death by his parents and three siblings, Mildred, Earnest and Glenn. Survivors include his wife, Carolyn Sue Stuckey of the home; one son, Gus Dennis Stuckey Jr. and wife Kellie of Beggs, Oklahoma; daughter, Carolyn Denise Shipley of Henryetta; one brother, J.T. Stuckey and wife Kelly of Pawhuska, Oklahoma; 7 grandchildren, Megan Rene Bible and husband Josh, Lacy Dawn Selvidge and husband Nick, Jessica Jean Drake and husband Ivan, Jenny Lee Brewer, Martha Jean Shipley, Amanda Sue Gormly and husband Dakota and Lilly Denise Simmons and husband Anthony and 27 great-grandchildren. Honorary bearers include Ronnie Densmore, Dale Pendley, Aaron Walker, David Posey, Greg Ogle, Nathan Harris, Nick Selvidge, Josh Bible, Dakota Gormly and Anthony Simmons Jr. Services will be under the direction of Parks Brothers Funeral Home, Wetumka, Oklahoma. Online condolences may be made at www.ParksBrothersFuneralHome.com.

The family of Gus Dennis Stuckey Sr. created this Life Tributes page to make it easy to share your memories.

Send flowers to the Stuckey family.