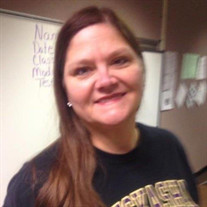 Holly Lois Swinford passed away on Saturday, May 9, 2020, at her home in Norman, Oklahoma. She was 64 years old and will be sorely missed. Holly was born to George and Ruby (Reeder) Swinford in Duncan, Oklahoma on October 26, 1955. Holly earned a BA in Speech from Northwestern Oklahoma State University in 1979. She worked as a teacher, including more than twenty years at Chickasha Public Schools. Outside of school, she was a part-time lobbyist and served as the longtime Political Director of the Central Oklahoma Chapter of A Brotherhood Aiming Toward Education (ABATE), a motorcycle enthusiasts’ group promoting biker freedom and education. Holly was instrumental in the passage of Jagger’s Law, legislation aimed at increasing safety for motorcyclists. She was active in the Oklahoma Democratic Party and a valued member of several successful campaigns. Holly pursued almost all things in her life with vigor and energy. Her passion for politics and her boldness could liven up even the most mundane of family gatherings. These personality traits often resulted in intrigue, quarrels, contrition, and side-splitting laughter, in that order. She loved music and art and was devoted to researching and keeping the family history. Holly’s enthusiasm for healthy debate served her students well as she taught them how to advocate zealously and disagree civilly. She invested in and encouraged her students, seeing ability and potential where others did not. She was preceded in death by her parents, George and Ruby. She is survived by her daughter, Laura Stone of Heavener, Oklahoma, and brother, Mark Swinford of Fargo, Oklahoma. Services for Holly will be held on Thursday, June 4, 2020, at 2:00 PM at the Parks Brothers Funeral Home Chapel in Okemah, Oklahoma. Services will be under the direction of Parks Brothers Funeral Home. Online condolences may be made at www.ParksBrothersFuneralHome.com.

Holly Lois Swinford passed away on Saturday, May 9, 2020, at her home in Norman, Oklahoma. She was 64 years old and will be sorely missed. Holly was born to George and Ruby (Reeder) Swinford in Duncan, Oklahoma on October 26, 1955. Holly earned... View Obituary & Service Information

The family of Holly Lois Swinford created this Life Tributes page to make it easy to share your memories.

Send flowers to the Swinford family.