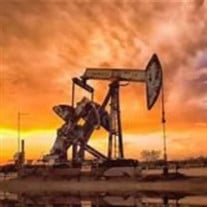 Funeral Services for Gene Pullen will be held Thursday, May 27, 2021 at 11:00 AM at the Parks Brothers Funeral Home Chapel in Wetumka, Oklahoma. Interment will follow at the Pullen Family Cemetery outside of Wetumka. Hughey Gene Pullen was born September 3, 1952 in Wewoka, Oklahoma to Herbert and Viola (Hill) Pullen. He passed away Saturday, May 22, 2021 at his home in Wetumka at the age of 68. Gene was a lifelong resident of Wetumka and a 1970 graduate of Wetumka High School. He married Vickie Collins on January 25, 1974 in Wetumka. Gene worked most of his life in the oilfields pipelining. He was a skilled welder and enjoyed fishing, cooking barbecue, and was known to some as the “Pitmaster of Gopher Hill”. More than anything else, he loved his family. Spending time with his wife, kids, grandkids, great grandkids and his brother were what he cherished most. Gene was loved by many and will be dearly missed. He is preceded in death by his parents. Survivors include his wife, Vickie of the home; his son, Donnie Pullen and wife Amanda of Wetumka; two daughters, Becky Pullen and husband Scott of Wetumka and Christina Pullen of Oklahoma City; his brother, Bob Pullen and wife Deb of Wetumka; four grandchildren, Levi Harris, Isaac Harris, D.J. Pullen and Dani Pullen and three great-grandchildren, Kaylee Harris, Carlee Harris and Jackie Harris (and one on the way). Pallbearers will be Jeremy Ramsey, Austin Caldwell, Justin Wright, Micheal Mier, Scott Rhodes and Chance Dean. Honorary Pallbearers are Donnie Goodin, Milton Johnson, Arlie Nolen, Gary Williams and Scott Moore Services will be under the direction of Parks Brothers Funeral Home, Wetumka, Oklahoma and officiated by Brad Burton. Online condolences may be made at www.ParksBrothersFuneralHome.com.

Funeral Services for Gene Pullen will be held Thursday, May 27, 2021 at 11:00 AM at the Parks Brothers Funeral Home Chapel in Wetumka, Oklahoma. Interment will follow at the Pullen Family Cemetery outside of Wetumka. Hughey Gene Pullen was... View Obituary & Service Information

The family of Hughey Gene Pullen created this Life Tributes page to make it easy to share your memories.

Funeral Services for Gene Pullen will be held Thursday, May 27,...

Send flowers to the Pullen family.