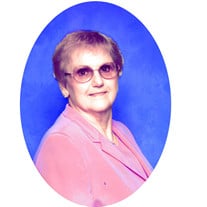 Funeral services for Ina Paulyne Bookout will be held Friday, June 1, 2018 at 10:00 AM at the Parks Brothers Funeral Home Chapel in Okemah. Ina Paulyne (Witham) Bookout was born in Pleasant Valley, Oklahoma on December 21, 1931, to Otho and Gertrude (Titsworth) Witham. She passed away Friday, May 25, 2018 in Sapulpa, Oklahoma at the age of 86. She grew up and lived in the Pharoah and Okemah area attending school and church where she was very active. She graduated from Pharoah High School. While in the Pharoah area attending a church function she met Kenneth Ray Bookout. They married on May 14, 1953 and were married and raised two sons Steven Dale Bookout and Phillip Bruce Bookout. Ina and Kenneth were married almost 25 years until Kenneth passed suddenly on April 23, 1978. She was an active member of the Assemblies of God and president of Christ Ambassadors (CA’s) Youth Group. As she got older she was a member of the Mount Vernon Freewill Pentecostal Holiness Church, in Oklahoma City, where she was involved in the ladies’ groups. When she was able, she attended Prattwood Assembly of God, Sand Springs, OK. She loved going to camp meeting, such as in Paducah Kentucky and Blanchard Oklahoma. Church was important to her and she shared by teaching Sunday School and working in the church’s she attended. She worked at the Diener Garment Factory for several years where she made men’s under garments. So, she was always able to make sure her boys always had clean new underwear “in case they were in an accident.” She earned an Associate of Arts degree at Oscar Rose and graduated with honors. Later she went to work at Tinker Air Force Base where she worked for over twenty years when she retired in 1997. She is preceded in death by her parents; two sisters, Wanda Lucille Skinner and Anetta Gaye Witham; four brothers, CW, Bob, Bill, and John Witham, as well as two nieces and two nephews. She is survived by her son Reverend Steven D. Bookout and wife Sue of Sand Springs, Oklahoma; Phillip B. Bookout of McLoud, Oklahoma; and two granddaughters, Cheri’ Cassity and husband Brad of Glenpool, Oklahoma; Amy Watson and husband Mike of Bixby, Oklahoma, as well as three great grandchildren Cynnamon Spencer, Alyxandria Cassity and Elliott Cassity and a host of nieces and nephews; two sisters Mona Black of Okemah, Oklahoma and Janice Stanley of Kilgore, Texas, one brother, Dink Witham of Henryetta, Oklahoma. Services will be under the direction of Parks Brothers Funeral Home, Okemah, Oklahoma and officiated by Steven Bookout and assisted by Brad Cassity and Mike Watson.

Funeral services for Ina Paulyne Bookout will be held Friday, June 1, 2018 at 10:00 AM at the Parks Brothers Funeral Home Chapel in Okemah. Ina Paulyne (Witham) Bookout was born in Pleasant Valley, Oklahoma on December 21, 1931, to Otho and... View Obituary & Service Information

The family of Ina Paulyne Bookout created this Life Tributes page to make it easy to share your memories.

Funeral services for Ina Paulyne Bookout will be held Friday,...

Send flowers to the Bookout family.